Submit Your Original Design Ideas for the ‘Mural on the Mount’

Want to make your mark on the Mount? Madelyn Minicozzi ’18 has just the opportunity for you. 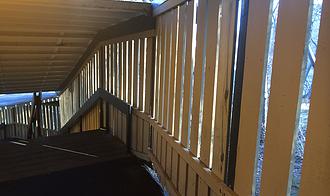 The Mount steps as they appear now

Minicozzi’s project, Mural on the Mount, was one of 13 chosen in a competition, held on campus last spring as part of the celebration of Chancellor Kent Syverud’s inauguration, to recognize and fund innovative student projects.

Upon completion of the project, a collage-type mural—composed of designs from the Syracuse University community—will stretch the length of the Mount Olympus stairway, which connects Flint and Day residence halls and Graham Dining Center with Sims Drive.

Minicozzi, an industrial and interaction design student in the College of Visual and Performing Arts from Rome, N.Y., and a resident of Day Hall, traversed the stairway daily during her freshman year, when she lived in Flint Hall. During each day’s descent and climb, she observed that the stairway was functional but uninspiring.

That gave Minicozzi an idea: What about reinventing and reimagining the steps by creating a mural that incorporated the artistic visions and talents of students and other members of the Syracuse University community? Thus, the Mural on the Mount project was born.

In imagining the mural, Minicozzi is looking to the University community for ideas. Individuals and groups—students, faculty, staff, alumni, clubs/organizations and fraternities/sororities—are invited to submit their original designs to http://mgminico.wix.com/muralonthemount by midnight on Saturday, Sept. 6. 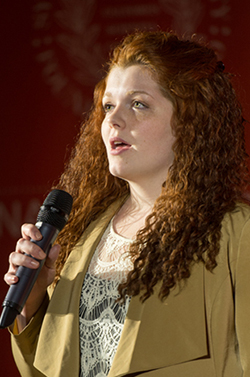 VPA associate professors Jude Lewis and Sam Van Aken, and Ellen King of the Office of Special Events, who have helped Minicozzi conceptualize the project, will assist in deciding what designs will be incorporated into the mural.

Artists who submit winning designs will be responsible for painting their design on the mural at a designated time. Group designs should not simply be their logo or crest but rather a visual interpretation of what they stand for and accomplish as a group.

While you might think that a stairway on the Syracuse campus should be painted bright orange or include images of Otto, Minicozzi says that is not necessarily the case.

“By bringing together all of these images, we have two of the biggest characteristics of Syracuse University: creativity and freedom, and the coming together of ideas into a single unit,” Minicozzi said in her presentation in April.

“We want to create a community on the Mount that can be united for a long time to come,” she says.