The United States is facing mounting pressure to re-establish the nation’s pre-eminence in the STEM (science, technology, engineering and mathematics) fields. Responding to that call to action is Jason Wiles, associate professor of biology in the College of Arts and Sciences.

Wiles was recently awarded an EAGER (Early-concept Grants for Exploratory Research) grant from the National Science Foundation in the amount of $169,734 to work with educators from both Syracuse and Onondaga Community College (OCC) toward increasing enrollment and retention in STEM disciplines among underrepresented minority groups.

“Expanding participation of underrepresented student populations in STEM disciplines is critical to growing America’s capacity in these vital fields,” says Wiles. “The departments of Biology and Science Teaching are committed to leading evidence-based reforms aimed at increasing the diversity of students that choose to undertake STEM majors.” 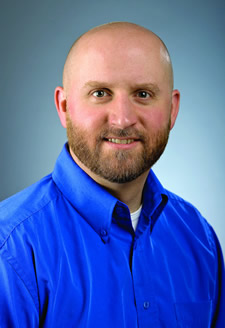 The project, known as ERRUPT, is a two-year initiative that will examine the impact of peer-led team learning on retention as well as the effect it has on enrollment in STEM majors.

The team hopes the project will help confirm that recognizing upper-division students from underrepresented minority groups and appointing them as peer leaders will increase their sense of engagement in the STEM community as well as their levels of achievement and retention in STEM disciplines. Furthermore, as peer leaders, Wiles and his colleagues believe these high-achieving students will serve as powerful role models for the incoming students they serve, potentially leading to greater achievement and recruitment among first-year students from underrepresented minority groups.

Wiles, who joined Syracuse University’s Department of Biology in 2008, also holds appointments in the departments of Science Teaching and Earth Sciences.

His research centers on key issues in biology education at all academic levels and in a variety of international contexts. He teaches a number of courses in the biological sciences, including the general biology sequence, which enrolls several hundred students every academic year.

Wiles earned a Ph.D. from McGill University. In 2010, he received the Science and Technology Outreach Award from the Technology Alliance of Central New York (TACNY). TACNY has been a key link among regional technical societies, working to enhance and facilitate the development, growth and advancement of education, awareness and historical appreciation of technology within the Central New York community. The organization presents the Science and Technology Outreach Award annually to a resident of Central New York who has increased interest in science or technology or expanded opportunities for people with limited access to science or technology.