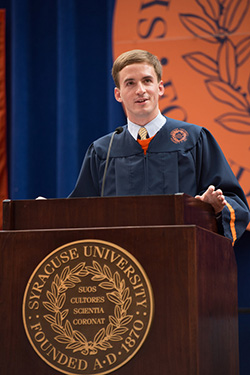 Stephen Barton speaks at the Convocation for New Students on Aug. 22.

Good morning. Thank you, Professor Andersen, for that introduction.

A little over two years ago, I stood on this platform, at this podium, in these robes, and in this Dome to give a commencement speech for my graduating class.

I was nervous—mostly about being the warm-up act for Aaron Sorkin, the Syracuse alumnus and creative genius behind “A Few Good Men,” “The West Wing,” “The Social Network” and “The Newsroom” (among others).

But while Sorkin may have given the better speech, I can pretty confidently say that I had cooler plans for the summer: I was about to embark on a cross-country cycling trip with my best friend, Ethan, from Virginia Beach to San Francisco.

We had been planning the journey for a few years, as a sort of cathartic, postgraduate odyssey. “Go West, young man”—but for the 21st-century. In my best friend’s words, we would “ride our metal steeds, side-by-side, off into the sunset.”

Well, the trip wasn’t quite as glamorous as all that—for one, there was a lot more chafing—but it was still a thrilling, eye-opening adventure. Ethan and I met countless fascinating, hospitable strangers, all while passing through some of our country’s most beautiful landscapes.

By the time we reached Denver in late July, we felt unstoppable. An acquaintance very generously invited us to stay with her, so we decided to treat her (and us) to the midnight premiere of “The Dark Knight Rises,” the newest Batman movie, at the Aurora Century 16 Theater.

Yes, that movie. On that night. In that Aurora. At that theater. And, of all moments, on the 44th day of our trip—a number that is dear to the heart of every Syracuse sports fan.

I was hit in the head and torso by a shotgun blast before I had fully realized what was happening. I remember hearing my best friend, who was not wounded, yelling at a 911 dispatcher through his cell phone. Our host for the night, who sat between us and whose ticket we bought out of gratitude for her hospitality, had been shot in the head.

A winding, unpredictable cross-country trip had led us to one of the worst mass shootings in America’s history. In a few short seconds, I had gone from feeling “unstoppable” to “imminently mortal.”

I thought I was going to die, but I didn’t feel ready at all. I was 22. I had just graduated from one of the best universities in the country with three degrees at the top of my class. I had a Fulbright grant to teach in Russia. I had an offer to join Teach For America in North Carolina. If nothing else, I had a cross-country trip to finish.

I was able to escape to the parking lot, where I found a police officer, whose quick thinking saved my life. My best friend Ethan escaped without physical injury, and our host survived miraculously without serious damage to her brain. I woke up two doors down from her in the intensive care unit of the hospital a few hours after surgery, filled with more than 20 pieces of lead and a renewed sense of vitality.

Shortly after I was released from the hospital, I returned to my home in Connecticut, where I found a package from an unknown sender sitting patiently at the front door. And included was a letter, which I would like to share now with all of you.

Many, many tears came as we heard the tragedy in Colorado at the Batman movie. It was time to pray for all of you, and I did.

In June 1955, I married my high school (Cazenovia Central) sweetheart and we lived in Syracuse University housing. Roger was a junior. On June 3rd, 1957, he graduated in Archbold Stadium. John F. Kennedy, Senator of Massachusetts, gave the address.

A few years ago we moved to Virginia from Skaneateles because Parkinson’s was affecting Roger’s life, and we wanted to be nearer family. Later, Roger fell and broke his hip, which brought on dementia, and his world became a challenge. We shared 56½ years together at the time of his death last December.

I wanted to give you Roger’s SU T-shirt because you both share SU as alumni. May you have good health, peace, love, and be safe on your bicycle.

Blessings to you and others, 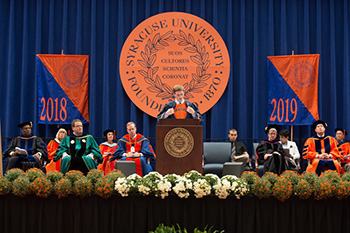 Barton displays the T-shirt he received from the widow of an SU alumnus.

This was just one of countless packages, letters, messages and texts I received from people connected to Syracuse in the weeks and months following the shooting. Their support inspired me during the lowest parts of my recovery, when I questioned what happened to me and why—and the people at Syracuse continue to inspire me.

Whenever physical therapy gets tough, I remember meeting fellow students who survived cancer at the Relay for Life fundraiser that takes place every spring inside this Dome.

Whenever my mind strays to dark places, I channel the strength of the survivors of sexual and relationship violence who I heard bravely tell their stories every year at the Take Back The Night rally and march.

Whenever I start to pity myself, I think of the many families I met while volunteering for Habitat for Humanity in the City of Syracuse, people who overcame their own personal setbacks and challenges to finally buy their first home and turn their lives around.

Today, you officially enter into this amazing, inspiring Orange family that stretches all across this city, the country and even the world. Look around you, at your fellow classmates, your new brothers and sisters. Like most siblings, you might not always get along, but you will always be there for one another in times of need.

All of you, collectively, will be responsible for creating a culture on campus of mutual respect, understanding and safety.

Spend time with your classmates who don’t look, sound or think like you—because they’re the ones who you’ll learn from the most. Just take it from me—the guy who lived in an open double with a gay roommate from Jamaica who had an inclination to speak with a proper British accent. I think I learned more during my first four weeks in Day Hall than all four years of high school.

If you’re ever in doubt, just think of my pen pal, Ellen, who reached out to a stranger during the lowest moment of his life. What would Ellen do?

The coming weeks and months are going to be challenging—they are for everyone—but don’t worry if you don’t find your best friends during your first semester here. It took me two years.

Just support each other, as good siblings do, and before you know it it’ll be that day, four years from now, when you’ll be in this dome, in these robes, walking across this platform, behind this podium. I can promise you Mom and Dad will cry again.