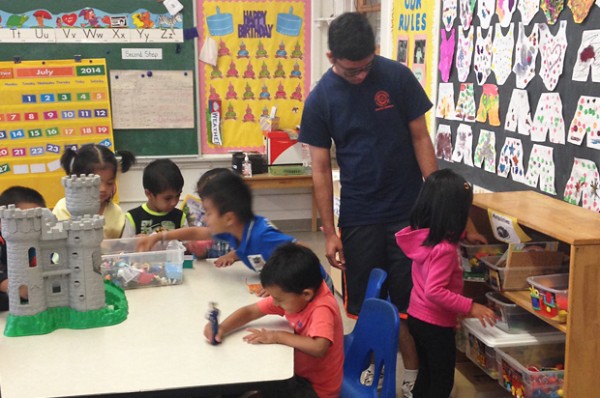 Totadri Dhimal ’15, works as an English tutor with preschoolers at Cathedral Academy at Pompei in Syracuse.

In a brightly decorated classroom lined with children’s artwork and brimming with the playful noise and energy of a bunch of 4- and 5-year-olds, Totadri Dhimal ’15 encourages talking.

The more the better, and he is an active participant as a Literacy Corps tutor.

Dhimal’s charges are from Burma, Nepal, Sudan and Vietnam. They are recent immigrants learning English as a second language in a preschool program in Syracuse. 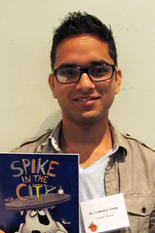 “Some of them have a confidence issue,” Dhimal says. “They don’t really talk to us or the teachers. They only talk to their friends, so I’m trying to be their friend and get them to talk to me and improve their speaking skills.”

Dhimal knows the new words of English don’t always come easy. Six years ago, he was the one learning English, having just emigrated with his family from Nepal.

“I had pretty decent reading skills, but my speaking was really bad,” Dhimal says.

Dhimal applied to become a Literacy Corps tutor with the Mary Ann Shaw Center for Public and Community Service after seeing the position posted online. The Literacy Corps program, a literacy initiative of the Shaw Center, continued through the summer with 26 students this year working full-time in Syracuse City School District summer school programming.

He works with a teacher in a classroom of 20 students at a school district preschool program operated by Catholic Charities housed at Cathedral Academy at Pompei, in the same North Side neighborhood in Syracuse Dhimal and his family call home.

Dhimal and his family moved to Syracuse from a refugee camp in Nepal in 2008. “My parents lived in the camp for 17 years; I was born in the camp and spent my childhood in the camp,” Dhimal says.

Tens of thousands of ethnic Nepalis who had lived in Bhutan for several generations fled to Nepal in the 1990s after Bhutan initiated repressive laws against those with Nepali heritage. The United Nations High Commission for Refugees (UNHCR) set up camps for those displaced and talks about the future of the refugees were held for many years between the governments of Nepal and Bhutan.

“They couldn’t reach any solution, like whether to give us citizenship of Nepal or go back to our homeland,” Dhimal says. “So they [UNHCR] decided to bring us to other foreign countries.”

The experience was, of course, life altering.

“I was pretty excited, because I knew I would have more opportunities to grow up here than in the camps,” Dhimal says. “But my parents were not happy. They were not willing to leave their culture and country and come to new country where you are kind of an outcast and not able to speak English. They had to learn everything and give up everything they had. They sacrificed for us.”

Trying to find the words

In the process of acclimation, Dhimal took English as a second language his first year in the school district. “I learned quickly and I jumped right into the regular coursework,” he says. He listened to how others spoke, watched movies and tuned into the radio, picking up on the nuances of the language.

“It felt hard to speak out. Eventually I got used to it and I’m really good at math and science, which gave me confidence,” he says.

Dhimal, who is a biochemistry student in the College of Arts and Sciences, chose Syracuse University because it was close to home and family. He chose his major because of his first home.

“Health conditions in the camps were deteriorating,” Dhimal says. “As a kid, I thought that someday I can be a doctor and help these people. And now I am in that position where I can actually pursue that career.”

The first step was in literacy, and he knows many of the people from Nepal still struggle with the language. “If I can contribute something to other people, children, and make it better, I am proud of it,” he says.

Literacy Corps tutors are trained by Shaw Center staff before they enter the classroom and are supported throughout the experience by staff members, including Amanda Johnson G’11, the Shaw Center’s new Winnick Literacy Program coordinator. During the summer program, tutors work full days in classroom settings and report back to campus each afternoon for debriefing and training sessions. 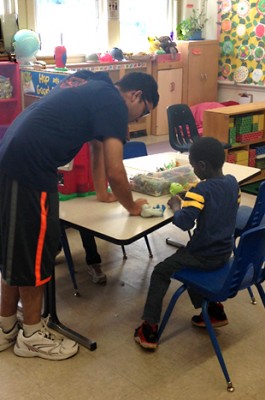 Dhimal works one-on-one with a preschooler.

“In preschool that specifically means a high level of engagement in a child-directed environment,” says Cynda Lamb, preschool program manager at Catholic Charities of Onondaga County, which has had a long relationship with the Shaw Center in a variety of programs. Lamb has supervised Shaw Center students in Catholic Charities placements for over a decade. “Tutors engage with children through play experiences and encourage conversation.”

Lamb appreciates Dhimal’s commitment to the program and his friendly personality.

“Totadri also has the personal experience of refugee resettlement and is a native speaker of Nepali,” Lamb says. “Summer program is the first school experience for many students and having Totadri there to provide direction and words of encouragement in the native language of so many students was incredibly beneficial.”

“He was also a great asset in communicating with parents of Nepali children and helping them be engaged in their child’s school experience,” she says.

For Dhimal, the experience has allowed him to connect with the students and learn from many different cultures. “It’s really nice and fun working with them,” he says. “They really care for me and I care for them.”

This story is another in a series that highlights some of the projects and people of the Mary Ann Shaw Center for Public and Community Service, as it celebrates its 20th anniversary this year.