Syracuse University has been named one of 2014’s top 50 LGBT-friendly campuses by Campus Pride.

Syracuse University has been named one of the 50 top LGBT-friendly colleges and universities, according to Campus Pride. Syracuse was cited for its LGBT Resource Center, which one student praised as “continuously friendly and inviting.”

“We are honored to be recognized by Campus Pride Index,” says D. Chase Catalano, director of Syracuse University’s LGBT Resource Center. “Our ranking reflects the intentional work within the LGBT Resource Center communities, as well as the efforts across the campus by students, faculty and staff. Further, such a distinction inspires us to continue our collective efforts to make Syracuse University more inclusive for all undergraduate and graduate students with marginalized genders and sexualities.”

Campus Pride is a volunteer organization that works to develop necessary resources, programs and services to support LGBT and ally students on college campuses across the United States.

This is the first year Campus Pride has released a list of the 50 best campuses. In the past, the organization has only featured a Top 25 each year.

“For six years in a row, Campus Pride has seen an increase in the number of campuses coming out as LGBT-friendly and making notable improvements to LGBT academic life, so we decided to honor 50 campuses with our national distinction,” said Shane Windmeyer, executive director of Campus Pride and the creator of the Campus Pride Index. For the third year in a row, more than 80 percent of participating colleges improved their rankings from the previous year. 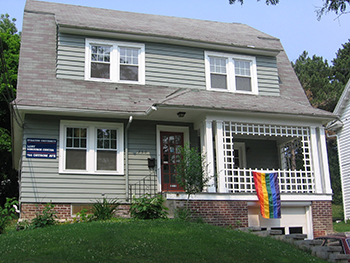 Founded in the fall of 2001, the LGBT Resource Center is the central resource for LGBTQA people on the Syracuse campus, and the entry point for students who want to get involved in the LGBTQA community.

“My experience with the Resource Center, the staff and programs has been wonderful. From getting in contact to begin the Ally development training program to meetings and the event itself, it was a very positive experience,” says a female bisexual student. “Everyone was welcoming not only to me but the organization I was a part of as well. Following that the center and staff were continuously friendly and inviting.”

“What I value most about the LGBT Resource Center is the sense of community that it offers to queer students on campus. I know when we think of safe spaces we tend to think about physically safe spaces. However, queer affirming environments where students can build community are also a very important part of the ability to feel safe,” says Jesh, a senior psychology and child and family studies double major, and LGBT Studies minor. “I can honestly say that the LGBT Resource Center has positively enhanced my overall college experience by allowing me to find these communities through programs, events, discussion groups, etcetera, that have fostered my overall growth and success at Syracuse.“

In addition to the LGBT Resource Center, the Syracuse University campus offers:

There is also an LGBT Studies program and minor, which introduces students to the interdisciplinary field of lesbian, gay, bisexual and transgender studies. In addition, Gen Q: An LGBTQ Learning Community is open to lesbian, gay, bisexual, trans and queer students and all other students with and/or interested in exploring marginalized genders and sexualities. An LGBT First Year Forum class is offered to first-year and transfer students, centered on LGBT issues.

On the administrative level, the interests of the LGBTQ communities are advanced by the University Senate Committee on LGBT Concerns. This committee was formed in the fall of 2002.