Light Work has announced the 40th annual “Light Work Grants” exhibition, featuring the work of the 2014 Light Work Grant recipients: Trevor Clement, Sebastien Collett and Dan Wetmore. The exhibition opened Aug. 18 in the Light Work Hallway Gallery, and will run until Dec. 17. A reception with the artists will be held on Thursday, Sept. 25, from 5-7 p.m. Light refreshments will be served. 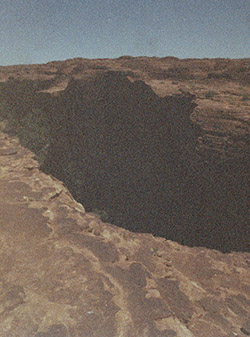 A work by Trevor Clement in the Light Work Grants exhibition

The Light Work Grants in Photography program is a part of Light Work’s ongoing effort to provide support and encouragement to artists working in photography. Established in 1975, it is one of the longest-running photography fellowship programs in the country.

Clement is a Syracuse-based visual artist, musician and performance artist. His photographic and visual art has been shown at Visual Studies Workshop in Rochester, the Spark Art Gallery in Syracuse and at the NoFound Photo Fair in Paris. Recent efforts have been focused on producing ’zines and artist books, musical endeavors and the administrative maintenance of BADLANDS, an all-ages, DIY art and music space in Syracuse. Over the past seven years, Clement has performed in various hardcore-punk/noise groups across the greater eastern half of the country. The do-it-yourself ethic, the antisocial, violent and anti-capitalist character of noise and hardcore-punk music all play a major role in Clement’s thinking about visual art.

Collett is a photographer working in the United States and Berlin. He studied with Stephen Shore and Larry Fink at Bard College, and earned an M.F.A. from the Hartford Art School. His work has been exhibited at 25CPW Gallery in New York and Kominek Gallery in Berlin, and is in the permanent collection of the Philadelphia Art Museum. He was recently awarded residencies at the Hambidge Center and the Vermont Studio Center. His work has been featured in Fraction Magazine and Vice Magazine and is included in Mossless Magazine’s survey of documentary photography, “The United States, 2003-2013.”

Wetmore is a photographer operating between Pittsburgh and Syracuse. He received a B.F.A. from Syracuse University in 2013, and now works at a food cooperative to fund his photography practice.