Richard Gluckman ’70, G’71 has created the Mark Robbins Lecture Fund in honor of Mark Robbins ’82, former dean of the School of Architecture. The fund will support an annual lecture in New York City by nationally and internationally known architects, scholars, curators, theorists and critics who are important contributors to the design disciplines. 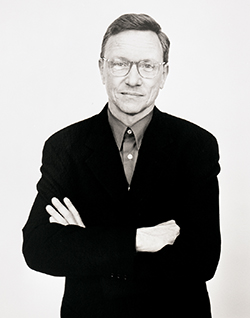 “We are grateful to Richard for creating this special gift. The fund will allow Syracuse University to grow our programming in New York City by bringing in premier thought leaders in design, benefiting both our students studying in New York and the larger community,” says Dean Michael Speaks. “Naming this after Mark Robbins honors his achievements as dean, and affirms his legacy at the school.”

Robbins was dean of the School of Architecture from 2004 to 2012, a tenure that was marked by increased student enrollment, expansion of the faculty and key additions to the staff. During this time the London and New York City programs were established and the renovation of Slocum Hall as a building solely dedicated to the architecture program was completed. In 2013, Robbins became president of the American Academy in Rome.

“I wanted to recognize Mark’s many accomplishments at the school,” says Gluckman. “I enjoyed working with Mark during my time as chair of the Advisory Board and hope that this gift enhances the public programming not only for Syracuse Architecture students in New York but the entire design community.”

Gluckman is the founder and principal of Gluckman Mayner Architects based in New York City. Since establishing his architectural practice in 1977, Gluckman has closely aligned his work with the world of art and design, creating distinctive spaces for numerous art galleries and museums, and developing installations with contemporary artists. Projects include the Nancy Cantor Warehouse in Syracuse, Syracuse University College of Law’s Dineen Hall and the Perelman Building at the Philadelphia Museum of Art. He is currently working on several projects in China.

Gluckman has been a visiting critic and lecturer at universities, including Harvard, Columbia and Syracuse. His awards include the National Design Award, an AIA National Honor Award, two Merit Awards from the AIA NYC and the Arents Award from Syracuse University. A monograph, “Space Framed: Richard Gluckman Architect,” was published by The Monacelli Press in 2000.