Institute for National Security and Counterterrorism (INSCT) affiliated faculty member David M. Crane, a professor of practice in the College of Law, testified Thursday, July 31, in front of the U.S. House of Representatives Committee on Foreign Affairs about allegations of torture and war crimes committed by the regime of Syrian President Bashar al-Assad during the ongoing Syrian Civil War. 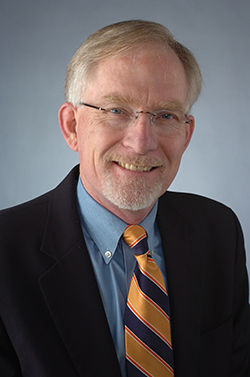 Along with Crane, M. Cherif Bassiouni, emeritus professor of law at the DePaul University College of Law and a frequent collaborator with INSCT, and the Hon. Frederic C. Hof, resident senior fellow at the Atlantic House Rafik Hariri Center for the Middle East, addressed the panel as well.

Also testifying was the person responsible for bringing to light more than 50,000 graphic photographs documenting the abuse and systematic killing of as many as 10,000 of Assad’s opponents. The photos were smuggled out of Syria by a Syrian army defector code-named “Caesar.” Now under protection, Caesar spoke to the committee in disguise, and to protect his identity, the briefing was not webcast or televised.

“Over the past three and a half years, the Assad regime has carried out a campaign of unspeakable brutality against the Syrian people, including chemical weapons attacks, mass torture, and mass executions against even peaceful political opposition,” said Rep. Ed Royce (R-CA), who served as chairman for the hearing. “The slaughter’s systematic nature is shocking. At the briefing, committee members listened to, and saw pictures from, the sobering account of a firsthand witness of Assad’s killing machine.”

INSCT is a joint academic research center at the College of Law and Maxwell School of Citizenship and Public Affairs.