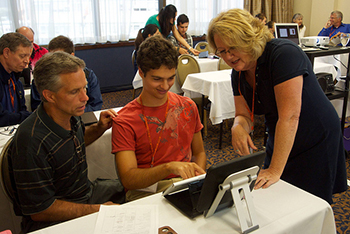 Darlene Hanson, right, a communication specialist from California, assists a non-verbal young man who communicates by typing on his iPad and his father in a Skill-Building workshop at the 2013 Institute on Communication and Inclusion Summer Institute.

The Institute on Communication and Inclusion (ICI) at the School of Education will host its annual summer institute at the Sheraton Syracuse University Hotel from July 28-30. This year’s theme, “Envisioning the Future: Writing a New Disability Narrative,” boasts a particular focus on the lived experiences and artistic endeavors of individuals who use supported typing, a form of facilitated communication (FC) to communicate, and their families, friends and allies.

Each year, the ICI Summer Institute provides opportunities for attendees to meet, type, talk and learn with other FC users, families, educators and professionals from across the country and around the world, by participating in workshops, sessions and panels from a wide range of FC users and practitioners. Over 250 individuals, including 75 who type to communicate, are expected to attend this year’s event.

The conference will feature a range of national and international presenters and exciting events. Keynote presentations will be given by:

Breakout sessions will be presented by panels of FC users from around the country, family members, facilitators, K-12 and university educators, and researchers. The conference will also offer workshops on memoir writing, narrative, poetry writing, rhythmic movement, adapted physical fitness, communication in schools, developing speech, artistic expression and skill building training sessions for FC users and their support teams. The complete conference schedule can be found at ici.syr.edu

For 20 years, the Institute on Communication and Inclusion has been giving a voice and a means to communicate to people with disabilities who may have otherwise been living in silence or isolation. The Institute on Communication and Inclusion conducts research and promotes support for people with disabilities to communicate in schools and society.