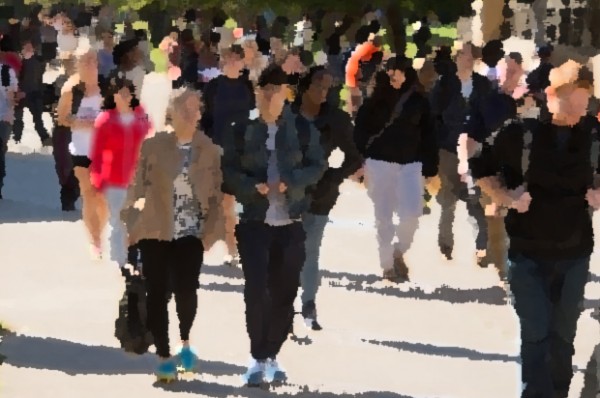 Associate Professor Yingyi Ma is researching the experience of Chinese undergraduate students on American campuses and looking at how colleges and universities can embrace a more “two-way street” of adaptation, as institutions enroll increasing numbers of international students.

When Associate Professor Yingyi Ma arrived on campus in 2006 to teach, she noticed few international students from China at the undergraduate level. Since then, at SU and other universities, a change has been occurring.

Those observations have led to her latest research and a purpose in helping institutions think about the best experience for international students.

A professor in the Department of Sociology in the Maxwell School and the College of Arts and Sciences and a senior research associate in the Center for Policy Research, Ma has two books in the works, one on Chinese undergraduate international students and the other an edited book on international students from Asia.

But she wants the research and discussion about international students to go beyond the usual framework of “adjustment, adaptation and acculturation” for those students alone.

“What we’re trying to do is promote a two-way street of adaptation, trying to encourage and emphasize how American universities can do more to look at the new reality of globalizing campus,” Ma says.

The 2013 Open Doors Report on International Educational Exchange found a 7-percent increase in the 2012-13 academic year of the number of international students at U.S. universities, reaching a record high of 819,644 students.

It was the seventh consecutive year for expansion in the number of international students—and a 40-percent increase from a decade ago.

With this growing trend, Ma says more research is needed on how colleges and universities can adapt along with the international students, whether it’s in understanding of learning habits, in-class work or cultural barriers.

“Some disciplines are seeing a huge spike in enrollment. Their classrooms are literally changed and they need information and connections to understand how they might need to change certain aspects of their teaching,” she says.

Based on her current research, Ma has seen some universities begin to recruit academic advisors who speak other languages, such as Mandarin. There is also a need to convey all the other university supports available to international students.

Ma has an extensive background in higher education research, in particular looking at the intersection of higher education and inequality. Earlier this year, Ma and Gokhan Savas, assistant professor of sociology at Luther College and Ma’s former doctoral student, looked at the impact of the choice of major vs. college selection on women’s pay.

Women on average earn about 82 cents for every dollar that a man earns. For those with bachelor’s degrees, the gap is even greater.

In “Which Is More Consequential: Fields of Study or Institutional Selectivity?” published in The Review of Higher Education, the authors used data from the National Education Longitudinal Study and found the pay gap between men and women is attributable more to college major choices than to college selection after college graduation.

Basically, it mattered more for early labor market returns that a women studied in a more lucrative major—such as science or business—than whether or not they attended an elite institution. Ma wasn’t entirely surprised by that finding, which has been looked at before, but pointed out a unique finding in that the impact is greater for less privileged women who benefit even more from their choice of lucrative fields.

For example, a woman from a working class background studying in the engineering field at a state college is doing slightly better than a woman attending a more selective institution in a less lucrative field.

“What really drives my ultimate interest in higher education and inequality is that you see this ever-expanding enrollment of college students and so much attention on access and attainment, but very little talk about the inequality among recent college graduates,” she says.

Ma also suspects that networking may also play a bigger role in the gender gap. Men may be better able to segue a less lucrative major into a higher-paying field through networking and career mentoring.

Institutions can do a better job of helping women network, not just business or engineer majors, but women in the liberal arts, who have aspirations in other disciplines or industries not necessarily associated with their major, Ma says.

Ma’s insightful research has been noticed in other ways. She was recognized earlier this year by the Maxwell School as she was named one of four inaugural O’Hanley Scholars, honoring outstanding teaching and scholarship and success with external grant support.

“It is an incredible honor,” says Ma, who was nominated by former sociology department chair Christine Himes. “I was very humbled by it.”