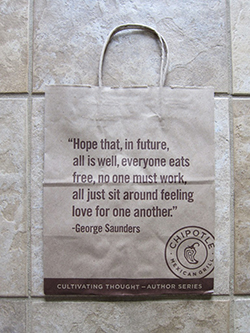 A quote from Syracuse University professor and author George Saunders appears on bags at Chipotle restaurants.

Customers at Chipotle are getting a side order of literature to go along with their burrito bowl and guacamole. 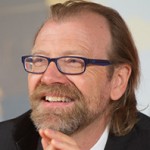 Syracuse University English Professor George Saunders is one of 10 authors whose works are now featured on cups and bags at the fast-food Mexican restaurant. The idea was the brainchild of author Jonathan Safran, who was eating a meal at Chipotle and had nothing to read. Chipotle produced a video to explain the campaign, which Chipotle is calling “Cultivating Thought.”

For Saunders it’s simply the latest in a long line of recognition for his work, including the compilation of short stories “Tenth of December,” which The New York Times called one of the top 10 books of 2013.