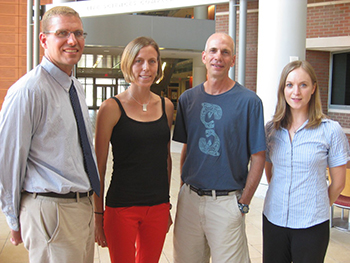 The honors continue to roll in for the Syracuse University team participating in this year’s J.P. Morgan Corporate Challenge. We already knew the race, which took place on June 17, attracted a record number of runners and walkers, including 169 faculty and staff from SU.

We also knew that Assistant Professor Sascha Scott was the top female finisher. After completing a two-week verification process of the 2014 JPMCC results, JPMCC Race Director David Oja has announced that Syracuse University takes first place, led by its mixed team with a time of 1:29:24. Scott was part of the first-place group that included research analyst Miranda Blechman, production manager Neal Coffey and Rick DiRubbo, director of student services at the Whitman School of Management.

“We had a good mix of seasoned runners and first-timers,” says Peg Northrup, assistant director in the Office of Government and Community Relations. “I had more than a dozen people tell me the race was a first-time experience for them. We had a great response on a beautiful night, even though it was on the warm side. It was a terrific opportunity for staff and faculty to come together for a health and wellness event that represented Syracuse University in such a positive way in the community.”

“That’s the really exciting part about this race,” said Coffey, “to represent the university in the community, and to show off some of our best runners. Traditionally we’ve had a real strong coed team through the years.”

“It’s always this nice combination of good local runners and then co-workers and fitness enthusiasts,” said Scott, who added it was “great” being on the university team.

From here, the foursome is now invited to take part in the international championships slated for next year, based on their top finishing time. Team members said they’re excited and hope to be able to represent the university on a national level.