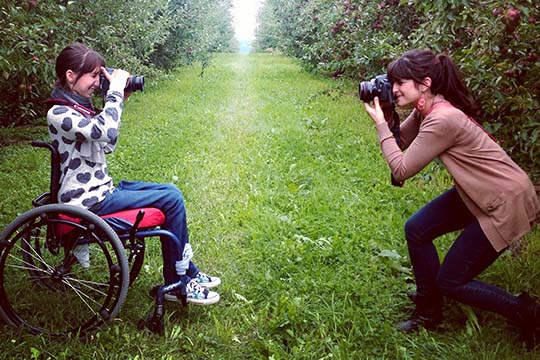 Taylor Baucom, right, and Gena Buza, who share a love of photography, snap a shot of each other at the Beak and Skiff Apple Orchard in LaFayette, N.Y., last fall. Gena is considered to be quadriplegic, though she has limited use of her hands and arms. (Photo by Sue Buza)

Newhouse graduate student Taylor Baucom has been photographing the story of 16-year-old Gena Buza for the past two years. Her photos have captured the daily life and joys of a vibrant teenager, who has a love for art and lives with the day-to-day routines of someone with quadriplegia.

Baucom’s subtle, yet powerful, images, which began as part of a Newhouse project, are now gaining a much wider audience on Time magazine’s Lightbox site. Time also ran one of the photos in the June 30 edition of the magazine promoting the online story.

“Raising My Head High”: A 16-Year-Old With Quadriplegia Goes to Her Prom was selected as a photo essay on the site with 29 images from Baucom’s work and a poem by Buza about the day that changed her life and the courage she finds in herself.

And that’s exactly what Baucom saw through her camera lens.

“I wanted to show Gena’s strength and document her life as a teenager,” Baucom says. “There was definitely a reality that I wanted to convey in my photos, but even in those vulnerable moments, I felt they showed strength.”

In black and white

Baucom’s black and white photos on Time’s Lightbox site, which highlights inspired and groundbreaking work, show Buza as she gets ready for her junior prom, prepares for another surgery and enjoys time with her friends and family. 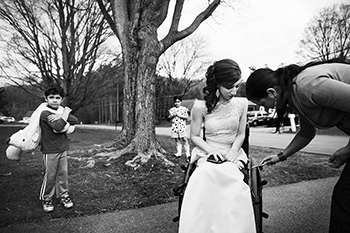 Sue Buza cleans the mud off Gena’s wheels with a toothbrush before prom to make sure it doesn’t mark her dress during pictures. (Photo by Taylor Baucom)

“The faith and family dynamic was another important aspect of the story, and Gena’s power stemmed from that,” says Baucom, a graduate student in the Department of Multimedia Photography and Design.

The project began as part of the annual multimedia Newhouse Fall Workshop in 2012, which had students searching for subjects for the theme of “a successful high school student.” In the workshop, students spend an intensive weekend working with industry professionals to develop their skills.

Baucom spoke with Pastor Dan Williams of the North Central Church in North Syracuse to see if he could recommend any students who were involved in their community or missions work. “He said without hesitation ‘Gena Buza,’” Baucom says.

Buza was left paralyzed from the chest down after a car accident in 2003 when she was 6 years old.

In a brief introduction to the photo essay, Baucom writes, “One might expect that this is the beginning of a tale that ends in broken dreams and heartache. But the heartache wore off, the dreams have evolved and Gena is today a remarkable 16-year-old with a story to tell. I have been photographing ‘Gena, In Constant Motion’ since 2012.”

The photos reveal the details of intimate family life–sharing a laugh over a secret, bedtime rituals and the prom dress reveal—moments Baucom not only photographs but shares in.

“From the moment they let me into their lives there was an instant connection that has continued to grow into an amazing relationship,” Baucom says. “Gena is also a photographer, so it’s been great to be able to connect with her on that level and for her to start documenting her own story and the stories unfolding around her. It is very exciting to see her work evolve and develop.” 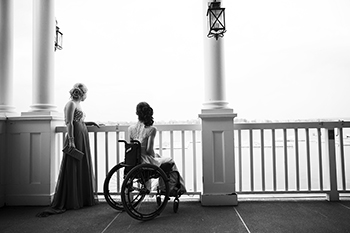 Gena and her friend Mary take in the view at the Skaneateles Country Club in Skaneateles, N.Y. (Photo by Taylor Baucom)

Her work got the attention of Time by a fellow Newhouse master’s student, Katie Hogin, who was interning at Time and presented Baucom’s photos to editors.

“The reaction the story has gotten has been unbelievable,” says Baucom, whose project tied for gold in the Domestic Picture Story category of the College Photographer of the Year competition last fall. “I have had people I have never met reach out to me about the story, admiring the work and asking for advice with stories they are working on.”

Others have also been in contact with Buza. “Gena has had multiple people and organizations reach out to her, such as the Christopher Reeve Foundation,” Baucom says. “There has been an outpouring of support from the spinal cord community. It’s been really rewarding to see the impact she is making on different people.” 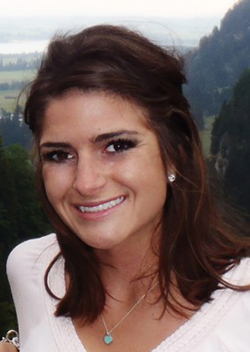 After completing her degree, her future plans may take her anywhere.

“I hope to continue working in the field of sports and continue working on personal photo and video projects,” Baucom says. “At this point in my life I am open and excited to explore any opportunity that presents itself.”

More of Baucom’s portfolio can be found at http://www.taylorbaucom.com.