Finnish Professorship Done but Not Forgotten 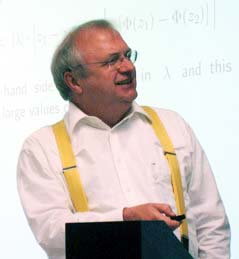 A mathematician in the College of Arts and Sciences may have found the equation for happiness, thanks to a recent professorship in Finland.

In May, Tadeusz Iwaniec returned from the University of Helsinki, where he spent the past six years teaching, mentoring and conducting research through the Finland Distinguished Professor (FiDiPro) Program. Since 2009, he had been splitting time between there and Syracuse University.

“Being in Finland was an honor, a privilege and the experience of a lifetime,” says Iwaniec, who serves as the John Raymond French Professor of Mathematics at Syracuse University. “To the University of Helsinki and the Finnish people, I owe tremendous thanks. I enjoyed every single day in Finland.”

Iwaniec says the FiDiPro appointment came about as the result of his previous collaboration with Finnish researchers, yielding several major publications, and his receipt of the “Philosophiae Doctor Honoris Causa” from the University of Helsinki in 2007.

“That I was invited to participate in the FiDiPro Program, as opposed to applying for it, has made the honor all the more special,” says the Polish-born mathematician whose métier includes nonlinear analysis and geometric function theory. “Although FiDiPro is technically over, I look forward to more collaborations with my Finnish colleagues. We still have important work to do.” 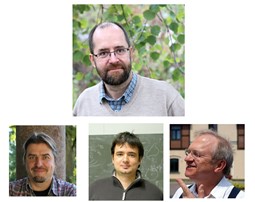 In Finland, Iwaniec worked on several different projects related to mathematical analysis. One of them involved Kari Astala, István Prause and Eero Saksman, all prominent professors at the University of Helsinki. Their studies revolved around an age-old problem concerning the Beurling Transform, an integral part of complex analysis and geometric function theory.

Saksman, an expert in probabilistic methods in analysis, considers Iwaniec a fount of knowledge. “Tadeusz is always coming up with new ideas, which he scrutinizes for hours—sometimes in the middle of the night—before writing them down,” he says, adding that Iwaniec leaves “no stone unturned. This makes working with him a pleasure. Ph.D. students and postdocs, in particular, marvel at how nice and approachable he is.”

Prause echoes these sentiments, adding that Iwaniec, an avowed college basketball fan, is no shrinking violet. “Tadeusz always brought a bit of March Madness to Finland,” says Prause, who specializes in harmonic analysis. “We’d often argue at lunch about crucial plays involving the Syracuse University [men’s basketball] team. It was fun seeing that side of him.”

Another project of Iwaniec’s took place at the Finnish Centre of Excellence in Inverse Problems Research. It was there that he interacted with a team of experts on Electrical Impedance Tomography (EIT), a non-invasive imaging technique that helps doctors visualize human organs and body parts, in hopes of better understanding their physiological and anatomical make-up.

Iwaniec, who is fluent in the mathematics involving EIT, compares the technique to an electromagnetic wormhole—sort of an invisible tunnel between two points in space. “EIT allows us to infer parts of the body, using surface electrical measurements,” he says, drawing comparisons to the “invisibility cloak” and other metamaterial devices. “EIT has major implications for the clinical diagnosis of illness and disease. It’s very exciting.”

Almost as exciting as his groundbreaking research with Jani Onninen, a Syracuse University colleague with whom he has co-authored more than two dozen papers. Currently, they are working on a monograph titled “A Variational Approach to Geometric Function Theory.”

Iwaniec and Onninen have also devised mathematical models for quasiconformal hyperelasticity, a theory with implications for the study of the collapsing phenomenon.

“Theoretical prediction of failure of bodies caused by cracks should appeal to mathematical analysts and researchers in the engineering fields,” says Iwaniec, who, along with Onninen and another Syracuse University mathematician, Leonid Kovalev, has proven the 50-year-old Nitsche Conjecture, a type of mathematical analysis using functions of complex variables.

“Tadeusz is a mathematician with the capacity to solve difficult problems,” says Syracuse University physicist Eric Schiff, alluding to Iwaniec’s work on the Nitsche Conjecture. “He combines talent with a passionate interest in human affairs and, thus, has many admirers around the world. I feel fortunate that he has chosen to spend much of his career at Syracuse University.”

In addition to conducting research, Iwaniec rounded out his time in Finland by teaching, lecturing and publishing. He kicked off his FiDiPro tenure with the publication of “Elliptic Partial Differential Equations and Quasiconformal Mappings in the Plane” (Princeton University Press, 2009), co-written by Astala and the University of New Zealand’s Gaven Martin. Critics have called the book “scintillating” and “full of detailed and thought-provoking contributions.”

Afterward, Iwaniec taught a five-year course on quasiconformal geometry and nonlinear elasticity, which annually enrolled about 25 Ph.D. students. Lectures in Germany, Spain, Italy and the United States were also part of the mix.

“FiDiPro helped me create an active research habitat,” Iwaniec says. “The program enabled me to collaborate with some of the world’s greatest thinkers, while providing dedicated resources for cutting-edge research and teaching. It’s an honor to belong to something that places a high value on STEM [science, technology, engineering and mathematics] capacity and programming.”

Iwaniec maintains his greatest responsibility is to the next generation of mathematicians. His passion for teaching is virtually palpable, as evidenced by the way he talks about students and colleagues and vice versa. “The best and most beautiful mathematics is not the one we are writing about and publishing. It’s the one that’s felt in the hearts of students, postdocs and colleagues,” he says.

Case in point: Iwaniec recalls a master’s thesis by one of his Finnish Ph.D. candidates, Aleksis Koski, that was completed at Syracuse University. Iwaniec says the paper was so exceptional that it snagged the Ernst Lindelöf Prize, a Finnish national award for best master’s thesis in mathematics.

Students return the compliment in various ways. Take Derek Gustafson G’04, G’10 and Alan Murphy G’10, both of whom visited their former professor in Finland. Murphy went so far as to spend a semester there as a FiDiPro Fellow.

“Tadeusz’s unconditional support for his junior colleagues is phenomenal,” says Uday Banerjee, professor and chair of mathematics at Syracuse University. “He is extremely successful in mentoring graduate students because of his patience, compassion and sense of responsibility. I feel proud to call him a friend and colleague.”