One of today’s leading arts leaders is the subject of a new book co-written by a writer for the College of Arts and Sciences. 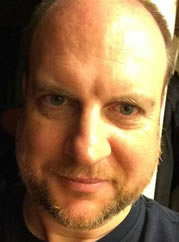 Rob Enslin, the college’s communications manager, has co-written the Ned Corman memoir, “Now’s the Time: A Story of Music, Education, and Advocacy”(Epigraph, 2014). A resident of Rochester, N.Y., Corman is best known as founder of the Penfield Music Commission Project (PMCP) and its national successor, The Commission Project (TCP). He also is closely associated with several major festivals, including the Xerox Rochester International Jazz Festival (XRIJF).

“Ned Corman has made a career out of encouraging young musicians; perhaps I was one of his first,” writes Flugelhorn player and composer Chuck Mangione in the foreword. “If this book captures any of the musical joy and passion that he and I have experienced over the years, it should be quite a read.”

“His voice comes through as irreverently as ever, making ‘Now’s the Time’ an irresistible addition to the shelf of timely books on learning and life,” says Theodore Wiprud, vice president of education and holder of the Sue B. Mercy Chair of the New York Philharmonic. “I’m happy that I’ve gotten to know Ned. This book reminds me of how formative those experiences have been for me.”

Adds Mark Nerenhausen, professor of practice and founding director of Syracuse University’s Janklow Arts Leadership Program: “Whether you are a performer, an educator or a civic leader, you cannot help but be moved by this Horatio Alger-type story. Ned is a consummate raconteur who has virtually written the book (no pun intended) on arts leadership.”

Self-described as an autobiographical memoir, “Now’s the Time” begins with Corman’s childhood on a farm in central Pennsylvania and moves through a series of vivid memories: small-town adolescence, coming of age at the Eastman School of Music in Rochester, life on the road in the waning years of the Big Band Era and teaching music in public schools.

Close attention is paid to Corman’s abiding belief in the power of music that led him to form PMCP and TCP.

“‘Now’s the Time’ is partly a memoir and partly a ‘how-to’ manual for aspiring arts leaders,” says Enslin, who has more than 25 years of experience as a journalist, publicist and trombonist. “The book charts Ned’s hard-won success as a musician, educator and arts leader, while showing how culture, community and commerce can work together to effect change.” 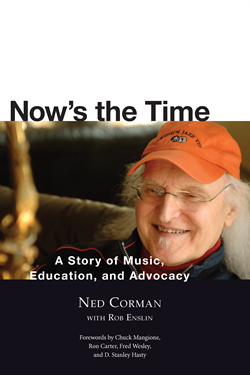 An accomplished clarinetist who doubled on sax, flute and bassoon, Corman earned music degrees from the Eastman School and Penn State. He spent the early part of his career on the road with Mangione, Fred Waring and a touring production of “Half a Sixpence,” as well as co-leading a rock ‘n’ roll horn band. Corman also worked the classical side of the tracks, amassing 40 years with the Rochester Philharmonic Orchestra as an “extra” and a sometime soloist doing pit work, and teaching privately.

It was in early 1980s, while co-chairing the music department at Penfield High School in Rochester, that Corman saw the creative possibilities of getting students together with professional musicians. He founded PMCP, which persists to this day in a slightly different format; and TCP, which, over a 14-year period, commissioned musicians to write nearly 400 pieces, of which more than 100 were published and 30 were commercially recorded and released. (One of them, Don Sebesky’s “Joyful Noise Suite,” earned a Grammy Award in 1999.) As a result, some of the biggest names in classical and jazz—from composer Augusta Read-Thomas to trumpeter Jon Faddis—visited over 90 schools around the country, benefiting an estimated 23,000 students.

The impact of these projects led to Corman’s involvement with Swing ‘n Jazz, TCP’s annual fundraiser; XRIJF, one of the nation’s largest, most respected jazz festivals; the Rochester Independent Music Festival; and Greentopia.

“His support of these various projects and festivals exemplifies the transformative power of music and bears witness to the importance of using the arts to build community and shape commerce,” Nerenhausen adds.

Jeff Beal, a leading Hollywood composer (“House of Cards,” “Monk,” “Pollock”), was one such artist who came to campus because of TCP’s largesse.

“In a country that values pragmatism and commerce over artistic pursuits, ‘Now’s the Time’ reads like a breath of fresh air for our asphyxiated culture,” says Beal, who was SIFF’s first music judge. “All music-making is local, and Ned’s commitment to and nurturing of our community are inspiring and challenging for the rest of us.”

“Now’s the Time” marks Enslin’s first full-length book project. Since joining Syracuse University in 2004, he has written for several publications, including Syracuse University Magazine, Arts and Sciences magazine, bE Magazine (published by the Department of Athletics) and Stone Canoe: A Journal of Arts, Literature, and Social Commentary. He previously worked at Nazareth College in Rochester.

Enslin began his career as a record executive and then spent two years as touring musician. Along the way, he has contributed to dozens of books, newspapers and magazines, including XXL, Essence Magazine and the Atlanta Journal-Constitution; has written liner notes and program notes for record labels and symphony orchestras, respectively; and has worked on DVDs, CDs, Enhanced CDs and CD-ROMs. His freelance clients have included IBM, Isaac Hayes, the rock band Kansas, and the Atlanta Opera, to name a few.