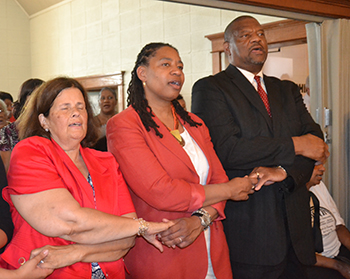 The Cold Case Justice Initiative (CCJI) at the College of Law received an award during the National Civil Rights Conference in Philadelphia, Miss., on June 15. The Civil Rights and Social Justice Award was presented to CCJI for its body of work in support of human dignity, civil rights and/or social justice.

“With Janis and Paula working together, and the resources and support of Syracuse University and their college and with the help of their students, what they can achieve is boundless,” says Keith Parker, chair of the National Civil Rights Conference. “As their motto says, it’s never too late for justice and so many individuals have been waiting 50 years or more. The CCJI provides some relief and some answers for the community and loved ones. They have shown that justice can prevail even when delayed.”

“We are honored to receive this award but we are in this fight for justice on behalf of the families,” CCJI co-directors and law professors Paula Johnson and Janis McDonald say. “This recognition gives us further determination to push local, state and federal governments to do much more to resolve the many unsolved civil rights murders in Mississippi, the South, New York and across the entire country.”

The Cold Case Justice Initiative at the College of Law conducts investigations and research on unresolved cases, public forums and other special events, and serves as a clearinghouse for sharing and receiving information on active cases. The CCJI insists on vigilant attention to these long-unresolved racially motivated killings and continuing issues of racial justice; its focus always on victims’ families.

“Our College of Law supports the work of professors McDonald and Johnson, who have tirelessly demonstrated their enduring commitment to the pursuit of truth and justice,” says Dean Hannah Arterian. “This award is well deserved and is so meaningful to our community and to the surviving family members who have worked with CCJI.”

Over the last year the CCJI has joined with the NAACP and the Southern Christian Leadership Conference, drafting resolutions with both organizations, calling on the U.S. Attorney General to fully implement the Emmett Till Unsolved Civil Rights Crimes Act.

Additionally, the CCJI sent student workers into five southern cities last summer to begin to take a full accounting of racially motivated killings that may have occurred during the period between 1955 and 1980. Cities included Atlanta; Nashville; Baton Rouge, La.; Jackson Miss.; and Jacksonville, Fla. Thirteen students conducted document research and participated in dialogues in these communities to identify and find residents who believe they lost loved ones in racially motivated crimes during the civil rights era. Review of materials and investigations are ongoing.