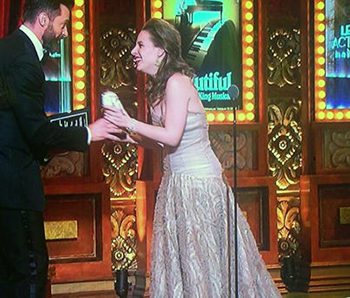 The excellence in theater awards known as the Tonys were recently handed out in New York City, and Syracuse University was well represented among the nominees and winners.

It’s not uncommon for alumni to take home a Tony statue. This year, there were three SU graduates among the winners. Jessie Mueller ’05 (VPA), actress, “Beautiful—The Carole King Musical” (Best Performance by an Actress in a Leading Role in a Musical); Stacey Mindich ’86 (Newhouse/Arts and Sciences), producer, “Hedwig and the Angry Inch” (Best Revival of a Musical); Daryl Roth ’66 (HD), producer, “A Raisin in the Sun” (Best Revival of a Play).

For Mueller, it’s the latest recognition in her already stellar career. Mueller was also nominated for a Tony in 2012 for her role in the musical “On a Clear Day You Can See Forever,” and was recently featured in an article in The New York Times.