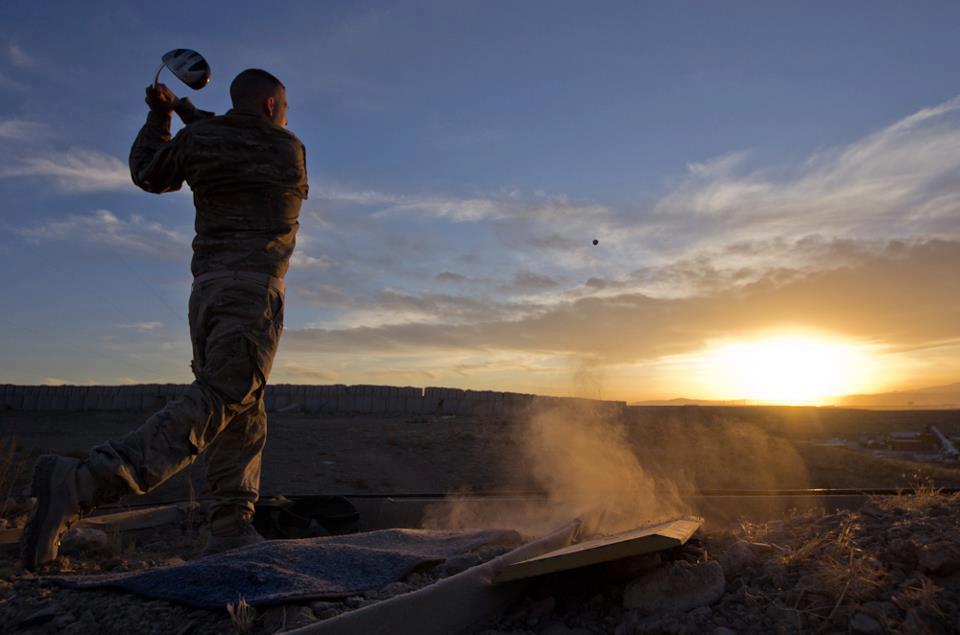 A U.S. soldier follows through on his golf swing during a sunset in Kandahar, Afghanistan, this year. The equipment was provided by Bunkers in Baghdad.

The fairways may be a bit rough and the khakis and cleats replaced with fatigues and combat boots, but the thrill of the swing remains the same.

At U.S. military bases around the world and veterans hospitals across the country, military members are appreciating the game of golf with the help of Maxwell School graduate student Joe Hanna and his nonprofit organization.

Bunkers in Baghdad ships golf balls, clubs and equipment to active and wounded soldiers, providing a break from the intensity of their work for some and a means to help recuperate from injury for others.

“It’s a form of recreation, it’s a form of rehabilitation and it’s a great game,” says Hanna, who graduates soon from the Maxwell School with a master’s degree in public administration. “There are passionate golfers out there and there are people who love our military. We’ve put those pieces together.”

Bunkers in Baghdad collects donations of new and used equipment and ships the items to bases and VA hospitals. A key part is the organization’s Bunkers Buddies program in which young people at schools, from elementary to college, help collect equipment and funding.

Shipments have made it to varied locations around the globe: soldiers in Kabul, Afghanistan; marines at Camp Pendleton in California; and recovering wounded military members at veterans’ facilities across the United States—to name just a few of the locations in 30 countries and in all 50 states.

Nearly six years since its inception in 2008, the organization hit an important milestone on Memorial Day: five million golf balls and more than 200,000 clubs donated for soldiers. 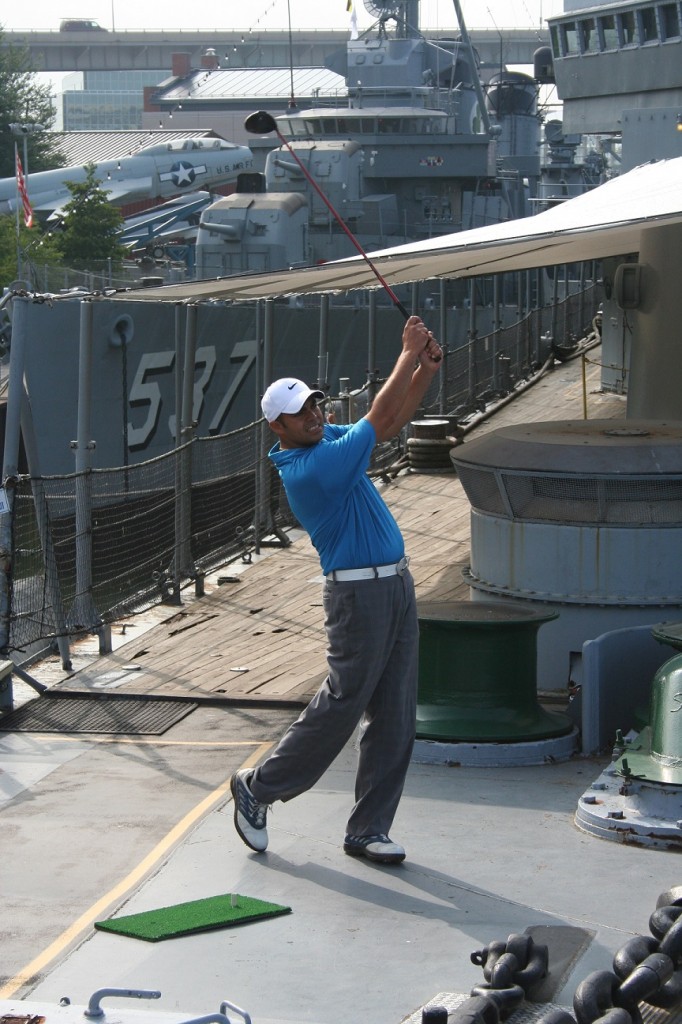 Joe Hanna hits a golf ball off the USS Little Rock in the Buffalo, N.Y., harbor in 2013.

Hanna was inspired to start the organization after reading a Golf Magazine article that highlighted the opening of a driving range for soldiers in Iraq and the number of makeshift driving ranges there. It was a way to de-stress and enjoy a game that Hanna himself is passionate about.

“It was just my inkling to give back and help others, which my parents instilled in me at a very young age,” says Hanna, who lives in Buffalo and is a partner in the Goldberg Segalla law firm. “These men and women do so much for us day in and day out to protect our freedom and democracy; I thought the least I can do is to send them some golf clubs and balls.”

The first donation of 300 golf balls came from a collection box at the Medal of Honor Golf Course at the Marine Corps Base Quantico, Va.

“In typical Marine fashion, they were handwashed, separated by brand and perfectly aligned when we got them,” Hanna says.

The collection was set up through a connection with a teacher in the Williamsville (N.Y.) School District—the first of the Bunkers Buddies partners—whose father worked at Quantico.

“We reached out to him and he set it up and we’ve been moving forward ever since,” Hanna says.

Help from across the country

Although the United States pulled its troops out of Iraq in 2011, the mission for Bunkers in Baghdad continued to spread wherever troops were stationed and donations come in from all over the country, including from such partners as Callaway Golf Co.

Shipments come in to Hanna’s firm in Buffalo, which has been supportive of his efforts and has provided offices to house some of the equipment. Many of the firm’s attorneys have connections to the military,either as former members or through family members in the military, including the firm’s managing partner, Rick Cohen, whose father, Sid Cohen, flew missions in WWII. “This is their way to give back,” he says.

Hanna, who also has a storage facility for equipment, gets 10-15 requests a day for equipment. Each shipment goes out with the letters and cards from students who are part of the Bunker Buddies program, which includes 170 schools in 42 states. 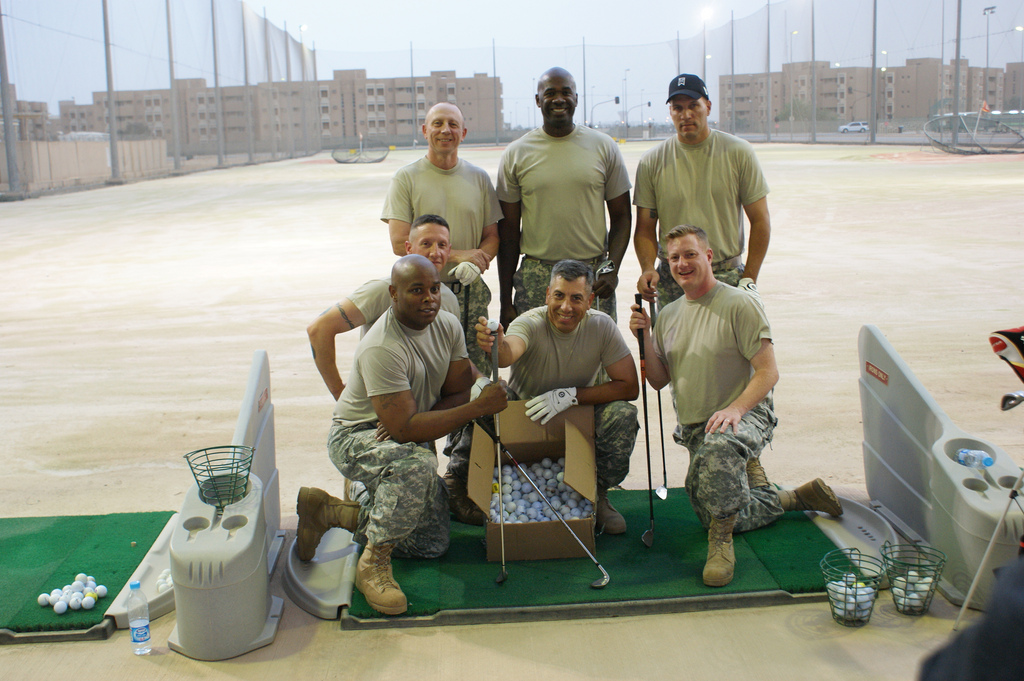 U.S. troops in Saudi Arabia open their package of golf balls from Bunkers in Baghdad to get ready to play.

“The number one thing that we hear back from the soldiers is ‘Thank you for not forgetting about us. Thank you for sending a slice of home,’” Hanna says.

In pursuit of a degree

Hanna, who recently appeared on Fox Sports’ “America’s Pregame Show,” wants to continue to improve the charity and help more troops and wounded warriors, and decided to pursue an M.P.A. degree at Maxwell with a concentration in nonprofit organizations to that end. The long days from Buffalo to Syracuse for classes paid off for Hanna, who also managed to fit in time playing with the Syracuse golf team.

“Every day, I’m implementing things that I learned in class, whether management-type courses or nonprofit classes or statistics,” he says.

His organization’s work has taken him to bases and VA hospitals across the country—including Fort Drum and the Syracuse VA Medical Center—where he’s made many friends along the way. It’s those relationships and the feedback from the troops that keeps him going.

In celebration of the milestone of five million golf balls donated, Bunkers in Baghdad is hosting an event Friday, June 20, from 5-8 p.m. at the Landmark Theatre in Syracuse. Tickets can be purchased at the door or on the organization’s website.