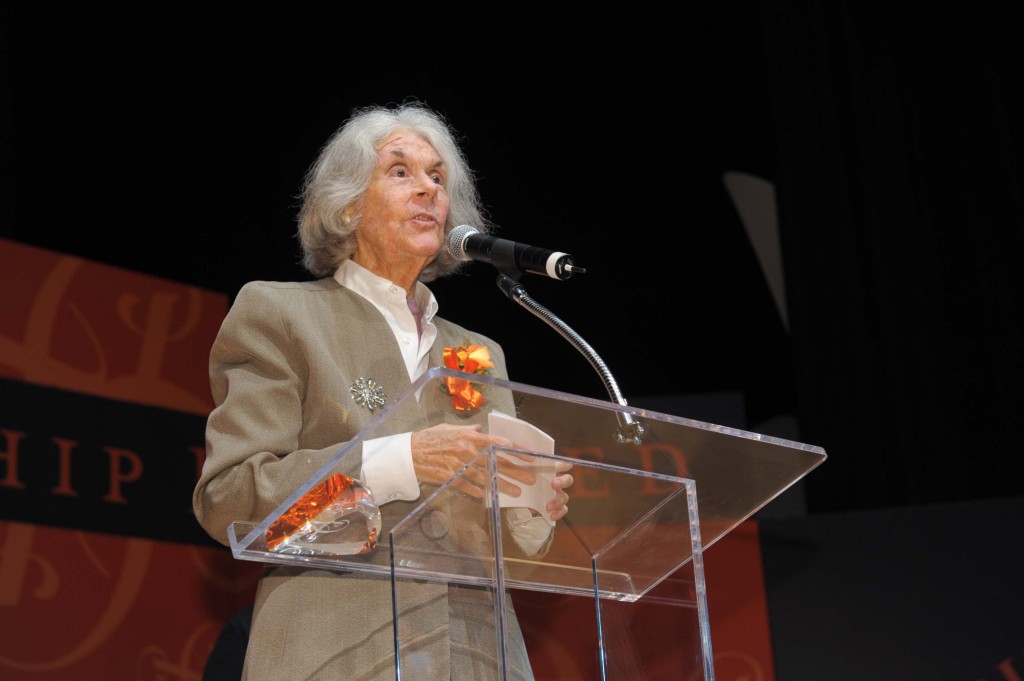 Karen DeCrow L’72 speaks at the 2009 Arents Award ceremony, where she was an award recipient.

An equal rights visionary and famed feminist, DeCrow is one of six SU alumnae inducted into the National Women’s Hall of Fame in Seneca Falls, N.Y. She was a nationally known attorney who specialized in labor law, civil liberties, and gender and age discrimination. She was also a 2009 winner of the Arents Award, Syracuse University’s highest alumni honor.

In a story published in the fall/winter 2009 edition of Syracuse Magazine, Amy Speach wrote about how DeCrow cited the weather as one of the reasons she joined NOW. During a visit with her mother in Florida, the two stayed inside during a rainstorm and turned on the TV. They watched a talk show interview about a new organization for women. She and her mother sent in their $5 registration fees immediately.

The article also highlights praise for DeCrow from one of her College of Law professors, Professor Emeritus Travis H.D. Lewin:

“She was unafraid as a student to raise issues in class, just as she has been fearless on behalf of equity for women in the workplace, in so-called private organizations and in many walks of life,” he says. “Karen is the standard-bearer for pro bono lawyering. Her unrelenting lifetime pursuit of justice for those for whom justice has been denied is the hallmark of the highest lawyering skill. We at the College of Law are very proud of her achievements.”

Print and broadcast media outlets nationwide picked up on coverage of the passing of DeCrow, as listed in Storify form below.