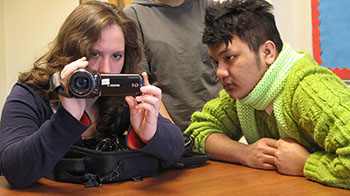 Five Fowler High School students have produced a film working with Newhouse Professor Richard Breyer and his Syracuse University students. This is the second year the Newhouse School and Fowler have partnered on this project.

The students’ film will be shown at 6 p.m. Monday, June 9, in the Fowler High School Auditorium, 227 Magnolia St.
The evening will also include food from the students’ home countries and a Q&A.

The Fowler student body speaks more than 25 languages; many students are refugees. The five participants reflect this diversity. Thing Sai and Jacob Ngawi are from Burma; Husam Jameel grew up in Baghdad; Mupenzi Kabera hails from the Republic of the Congo; and Priscilla Thunderberk is a native Syracusan.

Fowler Advisor Susan Centore explains, “The true story of Fowler lies in the students. What makes the school so special is not the building, but the students inside it.”

You can view one of the films from last year’s project, “A Player for Life,” here.