Urban Video Project and Light Work have announced the UVP Summer Review 2014. During the months of June, July and August, UVP will be screening the works from the 2013-14 programming year at UVP Everson. If you missed one of this year’s exhibitions, now’s your chance to see it! 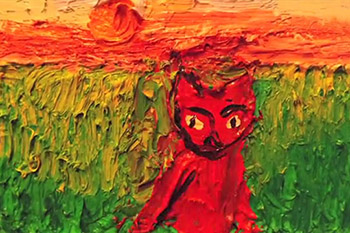 A still from “Sunset Donut” by Yui Kugimiya

This year’s UVP Summer Review will feature the following videos from the 2013-14 programming year:

All works will be presented as a continuous loop each exhibition night.

In Leventhal’s “Platonic,” geometric specters twirl in space, pet cats foam at the mouth, a little boy mistakes his junkie dad for a superhero and a confused adolescent worries he has sired a centaur. “Platonic” references both the ancient philosopher’s metaphysics of ideal forms—which simultaneously exist outside our perceptions and yet give rise to them—and the related meaning in common parlance of non-romantic love. Leventhal trains her searching lens on the distance separating bodies, moments and perspectives. The result is a study in the awkward gaps between appearance and reality, seeing and understanding, desire and its object.

“Still Raining, Still Dreaming” re-purposes the virtual world of the controversial “Grand Theft Auto” video game series, with its imperatives to random violence and crime, transforming Liberty City—the fictitious metropolis based on New York City in which the game is set—into a reflective space of stillness: depopulated of players, full of melancholy, longing and moments of compelling poetic beauty.

Kugimiya’s work is unique in its use of traditional painting techniques to create quirky stop-motion animations. Each of the 30 frames per second that make up the moving image is a unique painting, lending the videos a visceral quality in which the traces of time are materially present. The stars of this suite of short pieces are all anthropomorphic cats deeply engaged in some everyday task—brushing their teeth, placing their order at the counter of a fast-food stand, savoring a donut in the sunset—the cats are at once stand-ins for everyone and eccentrically specific individuals. The result is a whimsical and light-handed meditation on how the transcendent reveals itself within the mundane.

“I’ll Worship You, You’ll Worship Me” reflects on the artist’s background of years of studying and teaching Hindu rituals as a Brahmin priest in India. By creating parallels between the artist as priest, the art object as a deity and viewing it in the gallery/museum as a pilgrimage, he explores how conceptual art practice translates to thousands of years of intricate Hindu theory on dealing with imagery. In the two-way viewing theory of darsana, the pilgrim/viewer takes darsana of, or sees, the deity. Just as important, though, is that the deity is always looking back at the pilgrim/viewer, creating an acknowledgement of the viewer’s reverential presence.

Can the weight in the touch of a percussionist’s hand be visualized? How can a recording reveal the many subtle actions that bring forth musical virtuosity? What is the space between hearing and seeing, and how do we—the viewer-hearers—occupy this space? Inspired by the variety shows of his youth, composer David Lang envisioned a nearly impossible synchronization of two percussionists when he originally wrote the composition “Table of Contents.” After seeing a performance in 2011 by percussionists Susan Powell and Joseph Krygier, who were the first to perform the work as Lang originally envisioned, Hamilton imagined attaching an array of low-resolution mini-surveillance cameras to the hands of the percussionists and instruments. In the resulting video piece, Hamilton’s “table,” the cameras occupy the gap between hearing and seeing, and the edit generates a counterrhythm, a back-and-forth that brings us intimately into “impossible” virtuosity.