Ben Bradley, a prominent philosophy scholar in the College of Arts and Sciences has been named the inaugural Sutton Distinguished Chair. Named after Allan ’55 and Anita ’60 Sutton, the Anita and Allan D. Sutton Endowed Distinguished Chair in Philosophy Fund will support the activities, research and teaching of the Sutton Chair. Bradley, a professor who joined Arts and Sciences more than a decade ago, also serves as chair of the Department of Philosophy and director of the Integrated Learning Major in Ethics. 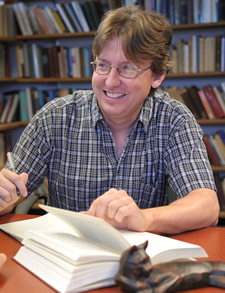 “It is an honor to be named the inaugural Sutton Distinguished Chair,” says Bradley, who was first named chair of the department in 2012. “Unfortunately, the humanities have experienced drastic funding cuts over the years due to the volatile economic climate. This fund, established by two passionate SU alums, serves as a reminder that the humanities are not only a critical piece of a solid liberal arts education, but more importantly a central part of society.”

An accomplished philosopher with expertise in ethics and philosophy of death, Bradley earned a Ph.D. from the University of Massachusetts at Amherst. He’s held academic positions at Princeton University, Western Washington University, Virginia Polytechnic Institute and State University and Illinois Wesleyan University.

This is not the first time Bradley has been recognized for his excellence in humanities. He’s a 2011 recipient of the Laurance S. Rockefeller Fellowship at Princeton University’s Center for Human Values and was awarded an SU Excellence in Graduate Education Faculty Recognition Award in 2013. A frequent contributor to renowned scholarly journals, Bradley’s had dozens of articles published in outlets such as Philosophical Studies, Journal of Ethics and Social Philosophy, Utilitas and Ethics.

“Ben is an outstanding scholar, who has made seminal contributions to the fields of ethics and the philosophy of death,” says George M. Langford, dean of the College of Arts and Sciences. “It is a privilege to name Ben the inaugural Sutton Distinguished Chair, as he exhibits the special qualities of an eminent scholar. The Department of Philosophy has seen tremendous growth over the years—both in reputation and in quality of academics—and that is a direct result of the Suttons’ commitment to the program. Some of the nation’s brightest philosophy scholars are past Sutton Fellows.”

The Suttons have been passionate contributors to Syracuse University since the early 1980s. Allan Sutton, who was instrumental in revising the Metropolitan New York Advisory Board in 1990, also served on the Syracuse University Board of Trustees from 1990 to 1996, and is today a life trustee.