The discovery of a “lost play” by one of Spain’s greatest writers was the subject of a recent standing-room-only event in Madrid, featuring a professor in Syracuse University’s College of Arts and Sciences. 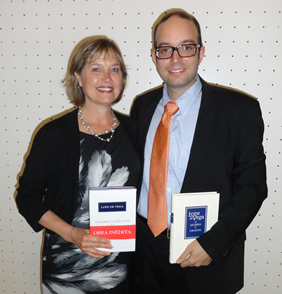 Alejandro García-Reidy poses with his department chair, Gail Bulman, at the event in Madrid.

Alejandro García-Reidy, assistant professor of Spanish in the Department of Languages, Literatures and Linguistics (LLL), gave the first public presentation about his discovery of the 1614 play “Mujeres y criados” (Women and Servants), by Félix Lope de Vega y Carpio, at the Biblioteca Nacional de España (National Library of Spain).

Among the more than 200 people in attendance was García-Reidy’s department chair, Gail Bulman.

“It was a phenomenal celebration and an extraordinary event,” says Bulman, also an associate professor of LLL. “Alejandro gave a detailed talk and PowerPoint presentation, chronicling his discovery and the archival work that went into verifying the play’s origin, history and authorship. He was followed by a dramatic reading of several scenes from the play by members of Rakatá-Fundación Siglo de Oro [a Spanish theater company].”

An annotated version of the play, which García-Reidy prepared with members of Prolope, a research group at the Universitat Autònoma de Barcelona (UAB), was also unveiled.

“This is like discovering something by Shakespeare,” says García-Reidy, who has been riding a wave of international publicity since January, when the Spanish journal Revista de Literatura (CSIC, 2014) published his article about the finding. “It represents a major contribution to the field of Early Modern drama, while demonstrating how research can transcend academic and geographic borders.”

Approximately two years ago, García-Reidy unearthed a manuscript to “Mujeres y criados”–dating from 1631, some 17 years after the play was completed—in the aformentioned library.

The play has become notable for the fact that the main characters are female—something almost unheard of 400 years ago.

“This discovery helps us delve into a rich, complex and very modern theatrical patrimony,” says García-Reidy, an expert in Early Modern Spanish literature and culture, the history of theater and the digital humanities. “Lope pushed the limits of Spanish theater, while exerting a major influence on the emergence of writing as a profession.” 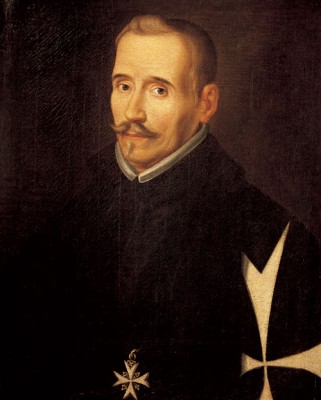 A key figure in Spanish Golden Age literature, Lope penned more than 1,500 plays and dramatic pieces, of which approximately 300 have survived. He also wrote over 3,000 sonnets and a handful of novels, novellas and epic poems.

Lope was so inextricably linked to Spanish literature that his rise to stardom coincided with the emergence of theater as a mass cultural phenomenon.

“Alejandro’s discovery sheds light on a critical period in Spanish culture,” Bulman adds. “That he brings a technological sensibility to his work makes history come alive, on stage and in the classroom.”

More information about “Mujeres y criados,” including its text, some philological notes and a brief documentary about its discovery and publication, is available in Spanish by clicking here.

A Syracuse University faculty member since 2012, García-Reidy is the author of a book about Lope titled “The Prostitute of the Muses” (Iberoamericana/Verveurt, 2013). He also has prepared several critical plays by Lope and another 17th-century Spanish dramatist, Agustín Moreto y Cavana. García-Reidy earned a Ph.D. from the Universidad de Valencia (Spain), before serving as a postdoctoral researcher at Duke University and UAB.