A Clearer Picture for Setnor 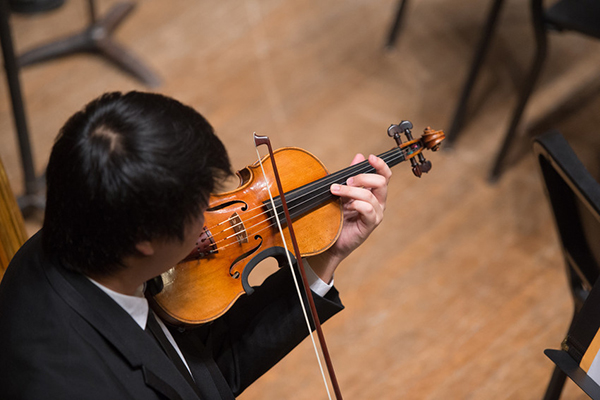 Families that cannot make to their Setnor School of Music students’ recitals can usually hear the music well through a remote connection, but the video quality has been poor up until now. A Fast Forward project aims to fix that problem.

As with many families of students in the Setnor School of Music, Lisa Kranz’s parents in Buffalo can’t make it to every performance that she has during the school year.

Live Internet streaming provides that link to students and the glorious sounds that reverberate through Setnor Auditorium.

There’s one thing that would make it even better for far away family and friends.

“The sound is good, which is most important. But the video quality is poor,” says Kranz ’16, a music education major. “My mom always says ‘I’m glad you play tuba because I know the shortest tuba player is you.’”

Due to the efforts of Kranz and classmate Melissa A. Bassett ’14, a clearer picture is in the works with support from Fast Forward and the College of Visual and Performing Arts.

Kranz and Bassett submitted a video entry into the Fast Forward competition earlier this spring for updated streaming technology in the 19th-century concert hall. The competition was part of Chancellor Kent Syverud’s inauguration, in which the University offered to fund a certain number of student projects that demonstrate how Syracuse and its students can have a positive impact on the world.

Thirteen entrants, including Kranz and Bassett’s submission, were selected for grant awards of up to $1,500 for their projects.

What do we need? 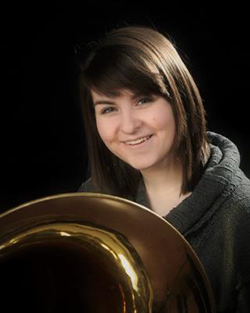 Kranz heard about the competition in an email. “I couldn’t pass up the opportunity, so I went around the music school asking students what they thought we needed,” Kranz says. “I got a lot of great ideas, but this was something we all wanted to fix.”

Setnor students come from all over the country and the world, as represented in the video with students from such places as California, Virginia, Panama and Ukraine, and many families miss out on seeing their student make their appearance.

“When you have your recital, that’s you on stage and you want your family to see it,” Kranz says.

Bassett, a music major who studied percussion, joined Kranz in helping to create the video after Kranz brought it to the attention of the music students during the all-school Convocation class.

“Lisa had the vision and recorded the video clips, and we talked about the background music and the point of our application video. I worked on editing and publishing the video,” Bassett says.

They also spoke with Setnor School of Music Director Patrick Jones and other professors. “Dr. Jones was all onboard for it and gave a quote for the video,” Kranz says.

“I was thrilled that Lisa took the initiative. It is very exciting,” says Jones, a music professor.

The students were happy to hear they had won one of the grants. “We celebrated and posted it to our Facebook event page that we had created,” Kranz says.

Kranz contacted Jones, who emailed the news to faculty and showed the video at a faculty meeting. 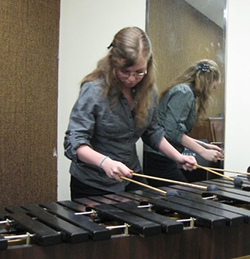 The students were proud of the win that they accomplished with their classmates, faculty and staff, and being able to present the idea to the Chancellor on Inauguration Day. “I loved being able to show the Chancellor what Setnor students can do and how we will fast forward ourselves, our community and our world,” Bassett says.

So far, a high-definition video camera has been picked out by Jones and technology staff member James Abbott, and will go through the school’s purchasing department.

The camera is just the beginning.

“This is part of a huge technology update that Setnor wants to do,” Kranz says. “This is the first step and from here we’ll see where we can go.”

Eventually families, along with alumni and potential students, will get to hear and better see what the Setnor School of Music is producing in its students.

“We want Setnor to be seen everywhere and what better way is there than to show the world our performances,” Bassett says.