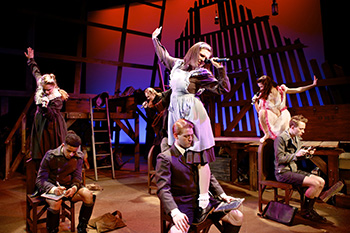 The cast of “Spring Awakening,” the final production of the Department of Drama’s 2013-14 season. Photo: Michael Davis.

The College of Visual and Performing Arts’ Department of Drama was ranked No. 13 on the Hollywood Reporter’s (THR) list of the “25 Best Drama Schools in 2014” in its June 6 issue. The article cites such notable alumni as Aaron Sorkin ’83 H’12, Frank Langella ’59 and Taye Diggs ’93. The rankings were based on a THR poll of 60 top casting directors and agents.