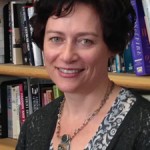 Good news seems to come in pairs for faculty members in the Department of Women’s and Gender Studies (WGS) in the College of Arts and Sciences.

Vivian May, an associate professor who joined the College of Arts and Sciences in 2002, was elected president of the National Women’s Studies Association (NWSA). Gwendolyn Pough, associate professor and chair, calls May’s latest accomplishment a “tremendous honor.” According to Pough, May has been quietly leading the NWSA behind the scenes in a variety of capacities.

The accolades for May don’t stop there. Just recently, the University’s Lesbian, Gay, Bisexual, and Transgender (LGBT) Resource Center awarded May a Social Justice Recognition Award.

“I am honored my colleagues across the nation have entrusted me to provide intellectual leadership to the organization for the next two years,” says May. “Between my colleagues here at SU and in the NWSA, I work with some of the country’s foremost women’s and gender studies scholars every day. There’s much work to be done: the NWSA is in an exciting period of expansion and growth and I am eager to begin my tenure as president. Among several other initiatives, I look forward to working with the membership to organize the 2015 and 2016 international conferences and highlighting cutting-edge feminist research across the disciplines and interdisciplines.”

May was elected to a two-year term, which begins in November 2014. NWSA Executive Director Allison Kimmich says May’s election is an exciting moment for NWSA.

“She is our first president who was trained as a women’s studies Ph.D. Vivian comes to the role as someone who has already done a great deal of thinking and writing about the field, and it will be exciting to have her bring that vision to her term as president,” Kimmich says.

May is among the first Ph.D.s in women’s studies in the United States. She earned a Ph.D. from Emory University, and has held faculty positions at Texas Woman’s University, Teachers College, Columbia University and William Paterson University.

“The good news just keeps on coming,” says Pough, who will step down as chair at the end of June. “It’s been such a pleasure to work with this amazing group of scholars. It comes as no surprise that the NWSA membership elected Vivian to lead the vibrant organization. With her at the helm, I am confident her leadership will ensure the NWSA remains relevant, not only to those of us in the field of women’s and gender studies, but for all of us doing innovative interdisciplinary work.”