Two Leaves and a Bud 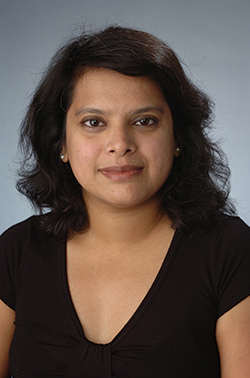 An art historian in the College of Arts and Sciences is the recipient of a 2014 Summer Stipend Award from the National Endowment for the Humanities (NEH).

Romita Ray, associate professor of art history in the Department of Art and Music Histories (AMH), is using the prestigious award—her second in five years—to study the visual cultures of tea consumption in India for her forthcoming book project, “Tcha Cha Chai.”

The stipend will enable Ray to complete an initial round of research in the United Kingdom this summer, while paving the way for additional fieldwork at a later date in India, Sri Lanka and China.

“Professor Ray’s summer stipend is a major accomplishment that reflects the quality of her scholarship,” says Theo Cateforis, associate professor and chair of AMH. “NEH grants play an important role in expanding our knowledge of the past, ourselves and our world. They also enable professors, such as Romita, to engage in crucial research that ultimately pays huge dividends for her and her students.”

An expert in European and South Asian art and architecture, Ray is focusing on the visual and contextual representations of tea in India over the past 300 years.

Since its discovery in China nearly 4,000 years ago, tea has been steeped in conflict, setting off wars and revolutions all over the world. Its impact as a prized beverage and botanical novelty was particularly felt in India, where, during the 19th century, Great Britain converted the subcontinent into a self-sufficient producer of one of the world’s most lucrative commodities.

“Chinese tea linked together the histories of China, Great Britain, India, and the United States,” says Ray, author of “Under the Banyan Tree: Relocating the Picturesque in British India” (Yale University Press, 2013). “In India, it transformed swathes of land into plantations, as well as produced botanical artifacts and material cultures that engendered social exchange, scientific discourse, medical debate, commercial advertising and patriotic zeal.”

It’s against this background that Ray examines the visual cultures of tea consumption, beginning with the rise of the British-owned East India Co., which monopolized the 18th-century tea trade in Asia and India; continuing with the Victoria Raj period of British rule from 1858 to 1947; and concluding with post-independent India, where tea drinking has made the transition from an imperial tradition to a national pastime.

Much of Ray’s research involves large-scale tea plantations, as well as porcelain and silver tea ware (mostly Chinese, British and Indian in origin) that have been used in department stores, tea rooms and bakeries throughout India.

“The plantations were not only agricultural hubs and scenic landscapes, but also indicators of the extent to which natural resources and human labor were exploited to fulfill the goals of imperial enterprise,” she says. “At the same time, tea came to be consumed by a range of consumers, from the well-heeled upper-crust to the common laborer.”

Ray says that while the tea table emerged as a distinctly British site of social exchange and material culture in India, it was entangled with a burgeoning nationalist movement that led to Great Britain’s undoing as an imperial power.

“Tea drinking produced sites of interactions between Britons and Indians and between Indian nationalists rallying against British rule,” Ray says, adding that widespread corruption and the Indian Rebellion of 1857 abetted the demise of the East India Co. “By the 20th century, this imperial beverage almost became an iconic, if not a national, drink in two modern-day nation states: Great Britain and India.”

“In the past decade, books about commodities and the material cultures they’ve inspired have used consumption as a point of departure,” says Ray, who earned a Ph.D. from Yale University. “My book will be the first to examine how a botanical exotic from China shaped an array of material culture and landscape design in India, within a framework of colonial commerce, exploitation and imperial entrepreneurship.”