In One Era and Out the Other

George Goldberg remembers the day he got his new hearing aids, along with a wireless clip-on microphone, from the Gebbie Speech-Language-Hearing Clinic. “My wife, Rita, and I went to Tully’s restaurant to celebrate—you know, the place with all the televisions,” he says, during a recent conference call from his home in DeWitt, N.Y. “At one point, I got up to go to the bathroom but left Rita wearing my clip-on mic.” George pauses for a moment. “Let’s just say I started hearing voices.” 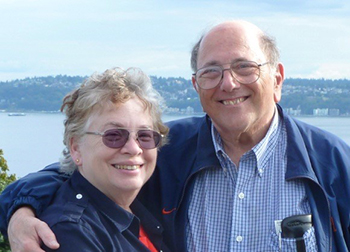 “I began talking to George from the table, using his microphone,” confesses Rita ’76, G’80, G’89, barely containing her laughter. “I had to make sure he was aiming okay, if you catch my drift. … Oh, I got him good.”

That was more than two years ago, when George’s hearing impairment began to worsen. “It became a steady hum of whisperings, mumblings, misunderstandings and misinterpretations,” he recalls. The prospect of ever hearing the high-pitched squeals of his grandchildren, Rita’s quick wit and bellowing laughter, or the melodious strains of his favorite musical theater pieces seemed to be a lost cause.

Enter Joseph Pellegrino, the Gebbie Clinic’s audiology director and assistant professor of clinical practice. He and a team of graduate students met with Goldberg over the course of two weeks, patiently conducting various diagnostic evaluations, hearing-aid evaluations and hearing-aid fittings. At the end of it all, Goldberg was the proud owner of two affordably priced ReSound hearing aids (one for each ear) and a small, discreet clip-on microphone—perfect for cutting through unwanted background noise at crowded sports bars. “Joe said the hearing aids were brand new, and that I was the first client to ever wear them,” Goldberg says. “I still can’t believe how well they’ve worked. They’ve completely changed our lives.”

Rita, a former rehabilitation counselor for the Syracuse City School District, calls the hearing aids a game changer. “Now I can’t mutter to myself anymore when I’m frustrated with him,” she jokes. “This is a guy who’s worn enough devices to fill up a hearing-aid museum.”

George, a retired photographic technician for General Electric, has been donning hearing aids for nearly 70 years. “I’ve worn things strapped around my chest, fitted into my shirt pocket, draped around my neck, connected to my glasses—you name it, I’ve done it,” he says. “What the Gebbie Clinic has given me is something smaller and lighter, moisture-resistant and far more compatible with my hearing loss than I’ve ever had before.” 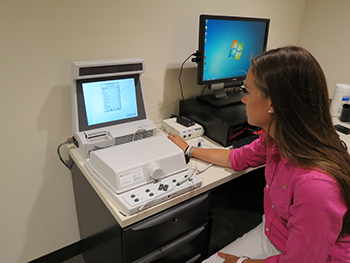 Pellegrino says these kinds of stories are becoming increasingly common—which is why he helped design the Hearing Aid Fitting/Demonstration “Living Room” in the Gebbie Clinic’s new headquarters on South Campus. Housed in the College of Arts and Sciences, the Gebbie Clinic is part of the Department of Communication Sciences and Disorders (CSD). Formerly located in the Hoople Building on South Crouse Avenue, the clinic and department are celebrating their 40th and 65th anniversaries, respectively.

Pellegrino says the Hearing Aid Fitting/Demonstration Room—and CSD’s new facility, in general—is part of a long-range plan to better serve the Gebbie Clinic’s some 3,900 clients. “We’re seeing a growing number of baby boomers who deal with hearing loss brought on by years of loud music and the aging process,” he says. “The numbers are alarming.”

With its ability to simulate real-world listening environments, such as crowds and noisy restaurants, the Hearing Aid Fitting/Demonstration room owes much of its “wow” factor to an Audioscan Hearing Aid Analyzer, a typewriter-sized tool used to quickly and accurately fit hearing aids. Add to that a library stocked with hundreds of audio files, an in-wall speaker and amplifier system, and a wall-mounted television for demonstrating assistive listening devices.

“There’s really nothing else like it in the Northeast,” Pellegrino says. “You’d probably have to drive to New York City or Boston to find something comparable. The room may very well be one of our campus’s best-kept secrets—but hopefully not for long.”

The Hearing Aid Fitting/Demonstration Room is a gift from John A. ’72, G’75 and Kathi Blatt Thonet ’73, the latter of whom is the second of three generations of Syracuse University alumni. Kathi says the gift was inspired by her daughter Rebecca ’05, G’08, a CSD alumna who has since become a successful Manhattan audiologist.

“Rebecca would often call me at midnight and tell me what she was doing and whom she was helping at the Gebbie Clinic and in the field,” Kathi recalls. “She was especially good with young children, and I invariably would be brought to tears, when she told me about their issues and what she was doing to help them.”

Today, Rebecca serves children and adults alike, ranging from those who work in theater and film to those with developmental disabilities. Not bad for someone who used to make her own earplugs while participating in the color guard of the Syracuse University Marching Band. “We need The Gebbie Clinic,” Kathi adds. “It plays an absolutely vital role, both at Syracuse University and in the community, at large.”

As for the future of audiology, Pellegrino is optimistic. He’s particularly excited about the possibilities of hearing-aid apps and Bluetooth wireless technology, the latter of which enables people to stream phone calls and music from their phones to their ears. That Apple’s new iPhone-connected hearing aid was recently singled out by Jimmy Fallon on “The Tonight Show” may be further proof of the changing landscape.

“There used to be a social stigma with hearing loss—that it was a sign of weakness or old age,” says Pellegrino, adding that most hearing aids used to be large and clunky. “But with all the recent technological breakthroughs, advanced hearing aids are small and attractive, to the point of being fashionable.”

Meanwhile, George Goldberg is content with finally being able to talk on the phone or have a conversation with his wife of 52 years in a crowded restaurant. “I guess you can say that the Gebbie Clinic added a new dimension to our marriage,” he says. “Of course, Rita will no longer be able to talk about me under her breath because I hear almost everything. My new hearing aids have made me a more active partner in our relationship.”