Neil Shubin, a nationally renowned paleontologist, evolutionary biologist and science writer, will deliver this fall’s Milton First-Year Lecture in the College of Arts and Sciences. 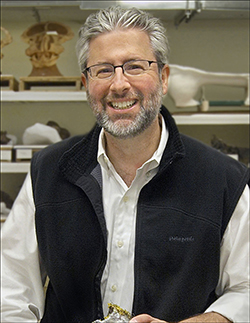 Shubin—author of the bestselling “Your Inner Fish: A Journey Into the 3.5 Billion-Year History of the Human Body” (Random House, 2008), which inspired a recent three-part series on PBS—will speak on Wednesday, Sept. 17, at 7:30 p.m. in the Schine Student Center’s Goldstein Auditorium.

The lecture is part of the college’s First-Year Experience and is open only to first-year and transfer students in arts and sciences and their First-Year Forum leaders. For more information, call the college’s Office for Curriculum, Instruction and Programs at 315-443-1414.

The event is funded by the Laura Hanhausen Milton Freshman Lecture Endowment.

“Neil Shubin represents a new breed of scholar whose work resides at the nexus of evolutionary theory and developmental biology,” says George M. Langford, dean of the College of Arts and Sciences. “He uses fossil findings, genetic discoveries and animal anatomy to show how everything that is unique about humans actually derives from parts shared with other creatures.”

Based in Chicago, Shubin serves as the Robert R. Bensley Professor and Associate Dean of Organismal Biology and Anatomy at the University of Chicago and as provost of the Field Museum. He is perhaps best known for discovering the “missing link” between fish and land animals and for his pioneering work into the developmental biology of limbs.

Shubin is also author of “The Universe Within: The Deep History of the Human Body” (Random House, 2013), which neurologist Oliver Sacks calls a science book of the “first rank.”

“The philosophy that underlies all of my empirical work is derived from the conviction that progress in the study of evolutionary biology results from linking research across diverse temporal, phylogenetic and structural scales,” writes Shubin, who, in the past 15 years, has led research programs throughout North and South America, Africa and Asia. “In my talks, I give insight into how events that spawned our cosmos have left traces embedded inside us.”

“His lecture will provide a glimpse into a scientific mystery that’s as big as the universe itself,” Greenberg says. “Using a variety of evidence, Neil Shubin will locate the universe’s 14-billion-year history within our very bodies and, in the process, will demonstrate the surprising connection among rocks, planet and people.”

A member of the National Academy of Sciences, Shubin earned a Ph.D. from Harvard University.

The Milton First-Year Lecture is named for Laura Hanhausen Milton ’50, a member of the college’s board of visitors who, along with her husband, Jack ’50, is a longtime supporter of Syracuse University.