Farewell Remarks and Reception to Be Held in Langford’s Honor 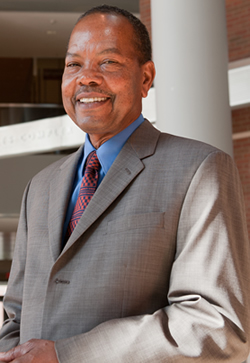 After six years at the helm of the College of Arts and Sciences, Dean George M. Langford will officially step down in June, but not before his esteemed colleagues, loyal staff and friends have the opportunity to send him off properly.

To celebrate his accomplishments, the college will host farewell remarks on Wednesday, May 28, in 001 Life Sciences Building, followed by a reception in the Jack and Laura Hanhausen Milton Atrium.

The remarks and reception, both of which are open to the University community, will begin at 4:30 p.m. and feature a variety of guest speakers, including Vice Chancellor and Provost Eric Spina, the college’s Senior Associate Dean for Academic Affairs Gerald Greenberg, Chair of the Department of Writing and Rhetoric Lois Agnew, Assistant Dean of Finance and Long-Range Planning Karl Solibakke and Sandra Hewett, the Beverly Petterson Bishop Professor of Neuroscience and a professor in the Department of Biology. Ramesh Raina, chair of the biology department, will serve as the master of ceremonies.

“Dean Langford will be greatly missed in the Hall of Languages next year,” says Greenberg, who has served alongside Dean Langford during the last six years. “He has fiercely advocated for the centrality of a liberal arts education; devoted a great deal of effort to increase research support for our students, faculty and endowed professorships; and committed his energies to attract and retain the best and brightest faculty for the college. Dean Langford has a distinctive and understated leadership style; as someone who believes in the importance of process, he strives to include all parties while working towards desired outcomes. His time as dean has served the College of Arts and Sciences remarkably well.”

Appointed dean in 2008, Langford plans to return to full-time teaching, research and mentoring students in his academic specialty of cell biology and neuroscience following a one-year research sabbatical, during which he will divide his time between the Marine Biological Laboratory at Woods Hole, Mass., and the Howard Hughes Medical Institute (HHMI) in Chevy Chase, Md. His research during that time will focus on the application of new “super resolution” imaging techniques and big data to analyze membrane trafficking patterns in nerve cell axons/dendrites and remodeling of the synapse during learning and memory. He will also work with HHMI to increase the academic participation of underrepresented minorities in STEM (science, technology, engineering and mathematics) fields.

“As a woman in science, I understand how important it is to encourage all under-represented groups to pursue academic interests in the STEM disciplines. This has been one of my top priorities and it has been so rewarding to work with Dean Langford, a positive role model, on that effort,” says Hewett, who just last week delivered the faculty remarks at Convocation. “One of the things I have appreciated most about Dean Langford is his steadfast commitment to research. Faculty like to know they can combine their passion for teaching with their love of research and Dean Langford has supported that effort 100 percent.”

Last December, Dean Langford was appointed as a Distinguished Professor of Neuroscience, a position he will hold upon his return to campus in 2015.

A nationally known neuroscientist and cell biologist, Langford served as a Distinguished Professor at the University of Massachusetts Amherst; was the Ernest Everett Just Professor at Dartmouth College; was appointed by President Bill Clinton to the National Science Board and is active in service to the National Institute of Health, the National Science Foundation and several scientific foundations; and was recently appointed a fellow of the American Association for the Advancement of Science.

“Leading Syracuse University’s largest college is no easy task and Dean Langford has managed to tackle the challenge with the poise of a true statesman,” says Agnew. “Though Dean Langford is a scientist at heart, he has always committed time, energy and resources to ensuring the growth and continued excellence of The college’s humanities unit. I value his dedication to providing our students with a well-rounded education that prepares them to be nimble, think critically and excel in any environment.”

A longtime proponent of interdisciplinary teaching and research, Langford has previously served on the faculties of the University of Massachusetts Boston, Howard University and the University of North Carolina Chapel Hill. He’s also held leadership positions with the National Science Foundation, Marine Biology Laboratory and Argonne National Laboratory. A longstanding advocate for supporting minority student success in the sciences, he served as inaugural chair of the American Society for Cell Biology’s Minority Affairs Committee.

The college’s Board of Visitors has established a research fund in Dean Langford’s honor. To contribute to the fund, visit the college’s online giving form (secure.syr.edu/giving/thecollege_giving.aspx) and select “George M. Langford Research Fund” in the drop-down menu.