Syracuse University Chancellor and President Kent Syverud this week announced the formation of a new leadership position to oversee the development and expansion of programming for veterans and the military. J. Michael Haynie, the co-founder and executive director of the Institute for Veterans and Military Families (IVMF) and the Barnes Professor of Entrepreneurship at the Whitman School of Management, will assume the additional role of Vice Chancellor for Veterans and Military Affairs effective July 1. 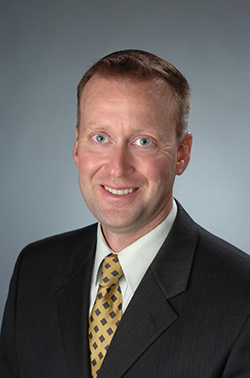 In this newly created position, Haynie will draw upon his accomplishments and proven track record of serving the educational needs of veterans and their families to inform the University’s future direction in the areas of veterans research, teaching and service.

“Syracuse University embraced veterans when almost all of our peers turned their backs on them at the end of World War II,” says Chancellor Syverud. “As executive director of the IVMF, Mike Haynie has taken the University’s celebrated past and built the best research and service institute available to the veterans of our armed forces and their families. I believe Syracuse University must once again become the best place for veterans.”

Shortly after he joined the faculty at Syracuse University, Haynie founded the Entrepreneurship Bootcamp for Veterans with Disabilities (EBV) at the Whitman School of Management, a social venture designed to empower post-9/11 veterans with disabilities through entrepreneurship. Since its inception in 2007, more than 800 veterans with disabilities have participated in the program, which is now being offered through a network of eight world-class business schools across the country. Haynie’s experience with the EBV program highlighted how the intellectual and social capital of higher education could be leveraged in new and innovative ways to positively impact the post-service concerns of veterans and military families. To that end, Haynie went on to create Syracuse University’s Institute for Veterans and Military Families in 2011. The IVMF is the nation’s first interdisciplinary academic institute focused purposefully on informing and impacting the policy, economic, wellness and social concerns of the nation’s veterans and their families.

“The institute is distinguished for its significant role in advancing knowledge and post-service opportunity on behalf of the nation’s veterans and their families,” says Haynie. “I’m grateful for the opportunity to continue the impressive work of the institute, engaging our talented staff and committed partners, while connecting IVMF to all corners of the campus and beyond.

“I’m honored by Chancellor Syverud’s appointment. I truly believe that we are at the precipice of something very special at Syracuse University, and I’m excited about the ways that this unprecedented commitment to veterans and the military will elevate the University and the IVMF and, most importantly, serve to motivate action and change related to the role of higher education as an engine of opportunity for the nation’s veterans and their families.”

A sought-after advisor and speaker on issues related to business, veterans and entrepreneurship, Haynie’s work has been featured by numerous national media outlets. He currently serves as the chairman of the U.S. Secretary of Labor’s Advisory Committee on Veterans’ Employment, Training, and Employer Outreach, appointed to that role in 2014 by Labor Secretary Thomas E. Perez. He also serves on the external advisory committee of the Center for Integrated Healthcare at the Syracuse Regional Veterans Medical Center and on U.S. Sen. Kirstin Gillibrand’s veterans’ advisory working group, and as an appointed member of Gov. Andrew Cuomo’s New York State Council on Returning Veterans and Their Families.

Haynie has received numerous awards for his community engagement, scholarship and teaching. Some include the U.S. Air Force Academy’s prestigious Snyder Memorial Award, the Guttag Research Fellowship, the National Federation of Independent Business Award for Research Excellence, the Michael Mescon Award for the Best Empirical Research in Entrepreneurship and the McGraw-Hill/Irwin Award for Innovation in Entrepreneurship Pedagogy. In 2007, Syracuse University honored Haynie with the Oberwager Prize for his efforts to make a difference in the lives of young people outside the classroom, and in 2010 he received the Chancellor’s Citation for Excellence for Engaging the World.

Haynie completed a Ph.D. in the field of entrepreneurship and business strategy at the Leeds College of Business, University of Colorado at Boulder. His academic research is focused on decision-making, identity and entrepreneurial thinking, and has been published in many of the leading entrepreneurship and business journals. He serves on the editorial review boards of the Journal of Business Venturing and the Journal of Management Studies.

Before beginning his academic career, Haynie served for 14 years as an officer in the U.S. Air Force. Trained in logistics and acquisition, he was stationed throughout the United States and around the world in both operational and staff assignments. Prior to joining the faculty at Syracuse University, Haynie was assigned as a professor of management at the U.S. Air Force Academy in Colorado Springs, Colo.