University College honored the part-time undergraduate students of the Class of 2014 at its 66th annual Convocation and Commencement Celebration held May 8 at Hendricks Chapel. 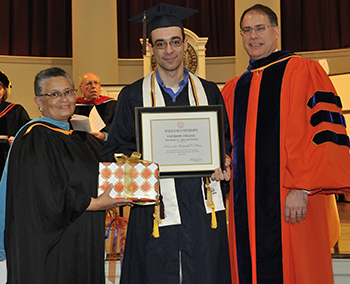 Alexander Kenneth O’Mara receives the Nancy Gelling Award, given to an Alumni Scholar with the Highest GPA. At left is University College Dean Bea Gonzalez, and at right is Syracuse University Provost Eric Spina.

Dean Bea González presided over the ceremony, which featured keynote speaker Rabbi Charles Sherman, author of “The Broken and the Whole: Discovering Joy after Heartbreak.” The part-time undergraduates eligible to receive degrees through the University represented 10 schools and colleges and 38 majors within the University.

Additionally, UC awarded the Excellence in Teaching Award to Craige B. Champion, associate professor in the Maxwell School. The Excellence in Online Teaching Award was presented to Molly Voorheis, an instructor in the Writing Program in the College of Arts and Sciences. The Staff Service Award went to the Office of Student Assistance, represented by director Sarah Solomon. Larry Higbee, owner/president of Higbee Inc., was awarded the Employer Service Award for his partnership with the TEDCenter working together on an Unemployed Worker Training Program.

The ceremony was immediately followed by a reception in the Heroy Geology Lab Atrium.