Chemists in the College of Arts and Sciences have figured out how to control multiple bacterial behaviors—potentially good news for the treatment of infectious diseases and other bacteria-associated issues, without causing drug resistance. 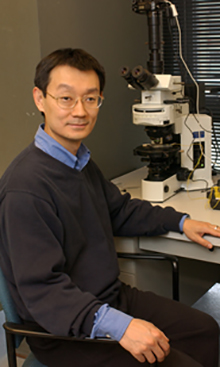 Yan-Yeung Luk, associate professor of chemistry, has spearheaded the discovery, in conjunction with his research lab at Syracuse University and the Wang Lab at SUNY Upstate Medical University. Their findings are the subject of a forthcoming article in the journal ChemBioChem (John Wiley & Sons Inc.).

“Since the discovery of the first antibiotic, penicillin, in 1928, bacteria have become smarter and have developed resistance to many drugs,” says Luk, an expert in bio-organic chemistry, nanomaterials and chemical biology. “They’ve done this by altering their genetic make-up; transferring drug-resistant genes between one another; and creating biofilms, which are multicellular communities where bacteria can be a thousand-fold more resistant to antibiotics.”

In response, Luk’s team has developed a class of chemical agents that does not kill bacteria but, rather, changes their multicellular behaviors. These agents are called disaccharide derivatives, and they mimic a class of natural molecules known as rhamnolipids, which are produced and secreted by the bacterium itself.

Luk says that while non-microbicidal (i.e., “non-killing”) molecules are nothing new, his are unique because they target a new, yet-to-be-explained set of biological receptors.

“Rhamnolipids modulate at least three multicellular bioactivities in Pseudomonas aeruginosa,” says Luk, referring to the rod-shaped bacterium that causes disease in animals and humans. “The synthetic molecules made by our lab don’t exactly look like rhamnolipids, but they can control bioactivities, such as swarming movements, surface adhesion and biofilm formation.”

This class, he adds, is non-microbicidal with a wide variety of microbes, thus giving it broad commercial value. It also has the potential to inhibit horizontal gene transfer—the process by which bacteria share genetic information, such as the ability to be drug-resistant. 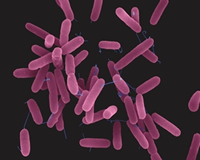 In the near future, Luk’s team plans to unveil another class of molecules they have designed that not only mimics but also dominates the activities of rhamnolipids.

“Rhamnolipids are already on the market, but our product, with its synthetic flexibility, has just as many applications and may be improved rationally by synthetic design,” says Luk, who also holds courtesy appointments in the Department of Biology in the College of Arts and Sciences and in the Department of Biomedical and Chemical Engineering in the College of Engineering and Computer Science. “All of this is subject to ongoing research.”