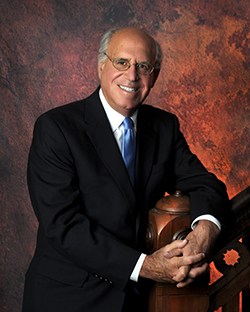 Rabbi Charles Sherman, senior rabbi at Temple Adath Yeshurun in DeWitt, will speak at the Commencement ceremony for University College on Thursday, May 8, at 6 p.m. in Hendricks Chapel. Sixty-nine students are eligible to graduate this year through University College.

Sherman, a native of Philadelphia, will begin in June his 39th year as senior rabbi at Temple Adath Yeshurun, the largest synagogue in Central New York. He is a graduate of Yeshiva College and the Jewish Theological Seminary of America, where he was ordained. Prior to arriving in Syracuse, he served congregations in Baltimore and Charleston, S.C. Sherman was presented with an honorary doctor of divinity degree from the Jewish Theological Seminary of America.

Sherman and his wife, Leah, are the parents of five children. In 1986, their oldest son, Eyal, suffered a stroke at age 4, leaving him quadriplegic and dependent on a ventilator. An accomplished artist who paints with a paintbrush in his mouth, Eyal today lives at home with his parents. Eyal is an honors graduate of University College with a bachelor’s degree in fine arts.

Sherman is the author of the critically acclaimed memoir “The Broken and the Whole, Discovering Joy After Heartbreak” (Scribner/Simon and Schuster, March 2014), which tells the tale of his family’s dealing with the monumental changes in their lives brought about by Eyal’s stroke.