The Central New York Association of Chiefs of Police honored three Syracuse University Department of Public Safety (DPS) personnel and a New York State Department of Corrections officer for their bravery and action during unexpected events at the University. The personnel were honored at the association’s annual Awards Banquet, held at Justin’s Tuscan Grill in East Syracuse on April 28. 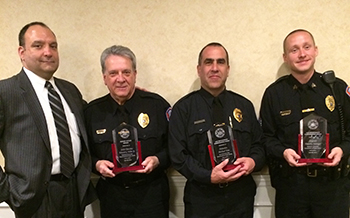 Senior Detective Edward G. Weber Jr. received a Heroic Action Award for his response to a traumatic lightning strike that injured him and another Department of Public Safety officer. On the night of Sept. 1, 2013, just before midnight, Weber was on patrol with Patrol Senior Specialist Stanley Prue. When they parked at a South Campus parking lot, Prue began to exit the vehicle. A lightning bolt struck Prue and then transferred into the patrol vehicle and through Weber. The concussion from the explosion of the lightning bolt knocked Weber backwards and into semi-consciousness.

When he regained his senses, Weber saw that Prue was no longer in or next to the vehicle, and, based on the sound of the lightening, he thought that the team was being shot at. Following his instincts and training, Weber exited the vehicle, prepared for gun battle and found Prue lying on his back on the ground several feet away from the car door.

Upon checking him, Weber realized he had been struck by lightning. Weber remained calm, took command of the scene and the incident, notified the Emergency Communications Center of the officer down, and began to render lifesaving first aid as the lighting continued to strike around them.

Although injured from the lightning strike, Weber was able to provide additional information over the radio several times during the response and continued to assist his fellow officer. Weber’s bravery and rapid response to a stressful emergency situation, without regard to his personal safety, resulted in saving Prue’s life.

During his investigation, Toia was able to obtain video footage on campus and on Centro buses and images of potential offenders responsible for these burglaries. These images were used to produce crime bulletins to alert members of law enforcement, both within the Department of Public Safety and throughout Onondaga County. On Feb. 15, the images of two suspects became the key element used in a well-coordinated and targeted burglary suppression detail that resulted in the recognition, identification, apprehension and arrest of those same two suspects for burglary.

On that date, Salanger was assigned to a plain clothes burglary suppression detail in the Hall of Languages. Salanger heard a banging sound coming from a hallway on the east side of the building. As he approached to investigate, he observed the two suspects exiting separate offices. The suspects engaged him in conversation in an attempt to develop a cover, and Salanger’s initial reaction was to act like a student and walk past the suspects, so as to avoid alerting them of his status. Salanger then notified the Emergency Communication Center by cell phone instead of radio, and directed responding officers to establish a perimeter around the building.

He continued to shadow the two suspects, who took flight upon seeing several marked patrols. During the foot pursuit, off-duty Parole Officer John Snyder was visiting the SU campus. Snyder saw uniformed and plainclothes officers in pursuit, joined in and assisted in tackling one of the two, while Salanger and another uniformed DPS officer tackled the other. The two suspects were apprehended and found to be in possession of stolen notebook computers, other stolen property and burglar’s tools.

Once notified of the apprehension, Toia responded and led in coordinating the arrests and collaborating with Syracuse city police detectives to connect the burglars to the prior burglaries. The two suspects were charged with burglary, grand larceny, possession of burglar’s tools and resisting arrest that day. Additional charges have been filed.