What You Need to Know about Commencement 2014

It’s time for cap and gown, family and friends, and making one more lasting memory at Syracuse University.

Syracuse University’s 160th Commencement will take place at the Carrier Dome Sunday, May 11, beginning with the degree candidates procession at 9:30 a.m. Graduates of the SUNY College of Environmental Science and Forestry (SUNY-ESF) will participate in the 117th Commencement of that college. 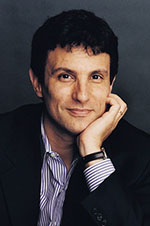 Syracuse University will confer approximately 5,155 degrees, which are the bachelor’s, master’s, doctoral and associate’s degree candidates. The College of Law will confer 212 juris doctor and nine master of law degrees during a ceremony Friday, May 9.

The Commencement ceremony will be the first for Chancellor Kent Syverud, who began his tenure in January. SUNY-ESF President Quentin Wheeler will also be conferring degrees for his first Commencement. Vice Chancellor and Provost Eric F. Spina will preside.

University Senior Class Marshals Stephen Rathbun and Leo Wong will lead graduates into the Dome. Rathbun of North Syracuse is a sport management major in the David B. Falk College of Sport and Human Dynamics. Wong is from Los Angeles and an advertising major in the S.I. Newhouse School of Public Communications.

In addition to the two all-University marshals, 23 student marshals represent the 13 schools and colleges at Syracuse University; ESF is also represented by two student marshals. They were chosen on the basis of leadership abilities, participation in extracurricular activities, service to the University and academic achievement. The marshals will lead the degree candidates of their respective schools or colleges.

Twelve seniors have been designated as Syracuse University Scholars and three as ESF Scholars. This is the highest academic award given to undergraduate students. Molly Linhorst, a University Scholar, will deliver the address on behalf of the Class of 2014.

Heading the academic procession will be mace bearer Nancy Weatherly Sharp, professor emerita of newspaper journalism in the S.I. Newhouse School of Public Communications. The University Marshal is Shiu-Kai Chin, professor of electrical engineering and computer science in the College of Engineering and Computer Science. Associate University Marshal is Kelly Chandler-Olcott, professor and chair of reading and language arts in the School of Education.

More than 70 faculty members and administrators serve as Commencement marshals.

Also during the ceremony, retiring faculty members who have been recommended to receive the title of Emeritus by the University Senate to the Syracuse University Board of Trustees will be acknowledged.

Bring in the band 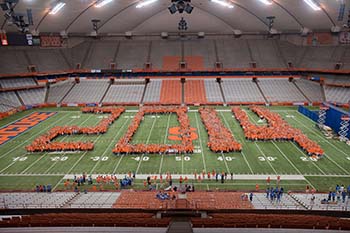 Members of the current graduating class form the year of their graduation in the Carrier Dome during orientation in their freshman year.

John Hottenstein, professor emeritus of television, radio and film in the S.I. Newhouse School of Public Communications, will be the announcer.

The Commencement ceremony is being webcast live at sugrad.syr.edu. WSYR-TV digital 9.2 (Time Warner Ch. 890; Verizon FiOS Ch. 470; NewVisions Ch. 23) will also broadcast the majority of the ceremony starting at 9:30 a.m.