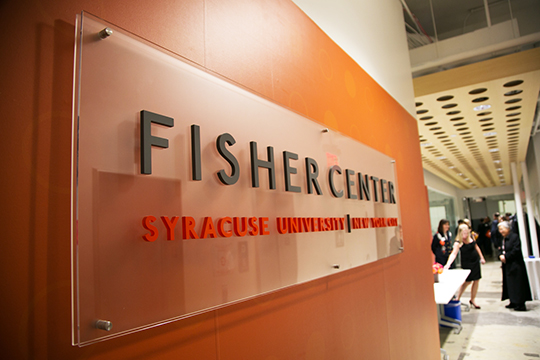 Drama and architecture students have been discovering their new home in New York City for the past few months. Tuesday night, a celebratory crowd came to see how they are settling in and officially launch the Syracuse University Fisher Center.

The University’s new academic center in Manhattan is opening up new opportunities for programs already in the city and many others to be realized in the 20,000-square-foot space.

“Of all the places Syracuse could have an expanded academic presence, I can’t imagine any place more logical or more important than in New York City,” Chancellor Kent Syverud told those gathered Tuesday. He noted the New York City metropolitan area continues to be the University’s largest source of students and its largest alumni base—and is “the city that keeps growing and changing in ways that change all of us no matter where we live.”

The University first operated in New York City from a one-room office in the Biltmore Hotel, followed by the establishment of the Joseph I. Lubin House in 1965, at 11 East 61st St., which will continue to operate as Syracuse University’s headquarters.

Last June, the soon-to-be Fisher Center space at 136 Madison Ave. (between 31st and 32nd streets) stood gutted and empty as the University’s transformation began to take shape. Less than a year later, drama students as part of the Tepper Semester and students in the Syracuse Architecture New York City program are wrapping up their first semester in the center.

More than 100 students, faculty, staff, alumni and friends of the University joined together in the center’s James Kuhn lecture hall for the evening’s events to mark the new facility. 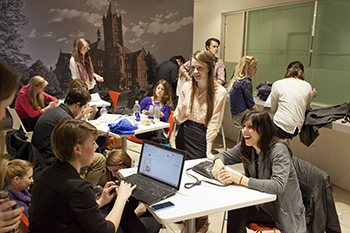 Students from the various immersion programs in New York City gather to work and relax in a lounge area in the new Syracuse University Fisher Center.

Speakers also included Winston Fisher ’96, who provided the lead gift for the new center, and James Kuhn ’70, G’72, a founding partner of the Fisher Center, who supports Syracuse’s architecture program and future Whitman School of Management programs in New York City, among other gifts to the University. Both are members of the Syracuse University Board of Trustees.

Fisher, a partner in Fisher Brothers, a family-owned real estate firm, shared how 10 years ago he spoke with Tom Walsh, executive vice president for the Division of Advancement and External Affairs, about the need for a Syracuse University academic center in New York City.

“Ten years later today, when you walk through this space, my jaw is dropping,” Fisher said. “You can see the energy in this place. The students are walking around. There’s a vibe. There’s a buzz. This place is going to be transformative for the University.”

He envisions the Fisher Center as a center for faculty and student recruitment and alumni activity, among many other uses for the University. “It’s going to allow the University to have a true home,” Fisher said. “The sky is the limit for this place.”

Fisher also thanked Kuhn for working with the University in finding the best location for Syracuse in New York City.

“When you try to pick a place, you want to make sure the parents feel it is secure and safe, and, of course, Madison Avenue always has a great ring to it. But the truth is for the students, it had to have the cool factor,” said Kuhn, president of the global real estate brokerage firm Newmark Knight Frank. “It turned out to be a great location.”

Alumnus Richard Eggers and William Eggers are also founding partners of the Fisher Center through their foundation. Rich and Bill are the sons of Melvin Eggers, Syracuse University Chancellor from 1971 to 1991, and his wife, Mildred.

Also speaking to the crowd was architecture student Ensam Lee, who welcomed the crowd and introduced Board of Trustees Chairman Richard L. Thompson. Tepper Semester student Doug Pemberton talked about his semester at the Fisher Center and how being in the city helped him land a job as a casting director for an HBO miniseries.

Guests were given tours of the center, saw a demonstration of a 3D printer in the architecture studio and listened to an impromptu performance by Tepper Semester students around a piano.

Already established in New York City, the Tepper Semester program was founded by Tony Award-winning producer Arielle Tepper Madover and based in the College of Visual and Performing Arts’ Department of Drama. The Tepper Semester has become an internationally recognized conservatory training program and has seen several of its graduates go on to have prestigious careers on Broadway and beyond—in acting, musical theater, casting, directing, design and stage management.

“The Fisher Center provides state-of-the-art studios, and a stronger academic and creative environment to support the students’ needs, including faculty offices, a student lounge and the physical space necessary for the program to continue its growth,” says Ann Clarke, dean of VPA. “This year 63 students are enrolled—the largest class ever.” 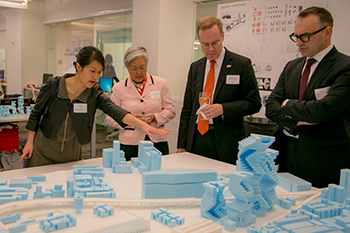 The Syracuse Architecture New York City program is a yearlong academic experience that explores such issues as resilient cities and places an emphasis on the intersection of architecture and real estate.

“The Fisher Center not only gives our students the opportunity to study in one of the finest design studio facilities in the New York City, but also provides a platform to develop and articulate—through lectures, workshops and symposia—a distinctly Syracuse Architecture approach to the challenges and opportunities confronting architects, planners and developers working in what is still the most dynamic city in the world,” says School of Architecture Dean Michael Speaks.

Along with the Tepper Semester and architecture program, the S.I. Newhouse School of Public Communications will have a presence at the Fisher Center with a full-semester program for journalism students this fall.

“Creating a program that operates out of the Fisher Center is the logical next step for the highly respected communications students and faculty of Newhouse,” says Newhouse Dean Lorraine Branham.  “To be placed in the center of the city with access to global media conglomerates, vital boutique agencies and a vast array of alumni in the field presents limitless opportunities.”

Other programs, including one through the Whitman School of Management supported by a gift from Kuhn and programs in education, social work and technology, are also in the works.

Highlights of the Fisher Center, along with all the other programs and events taking place as part of Syracuse University in New York City, can also now be found in a new website, http://nyc.syr.edu.

During Tuesday night’s event, Syverud thanked all those involved in helping to make the Fisher Center a success—and enabling the University to create something exclusively Syracuse.

“I’m really grateful you all had the vision to do this and made it happen before I could claim any credit for it,” Syverud said. “The best is yet to come in New York.”

This video provides a tour of the Fisher Center.

Tour the Fisher Center from Syracuse University News on Vimeo.

This video features interviews with two people who made the Fisher Center dream a reality.

Meet the men behind the Fisher Center from Syracuse University News on Vimeo.