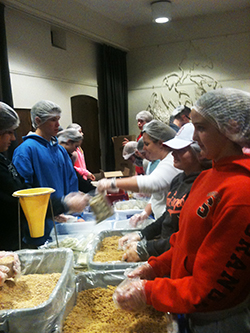 The event, the conclusion to LCM’s centennial celebration, will honor Donald and Edgar Appleton.

A basket raffle (4:30 p.m.) and banquet (5 p.m.) will precede the program at 6 p.m. The guest speaker will be Robert Thompson, Trustee Professor in the S.I. Newhouse School of Public Communications and founding director of the Bleier Center for Television and Popular Culture.

Thompson was a visiting professor for six summers at Cornell University and served for nine years as professor and director of the N.H.S.I. program at Northwestern University. He has written pieces for The New York Times, Newsday, The Los Angeles Daily News, The Christian Science Monitor, Electronic Media, Multichannel News and Encyclopedia Britannica, among many other publications. His commentaries have been heard on NPR’s “Morning Edition” and “All Things Considered”; he is a frequent contributor to The Washington Post; and he writes a regular column for AdWeek. Thompson is the author or editor of six books.

The general editor of an ongoing series of books about television published by Syracuse University Press, Thompson is also a past president of the national Popular Culture Association. He lectures across the country on the subjects of television and popular culture. In 1991 and 1992, he was awarded the Stephen H. Coltrin Award for Excellence in Communication Theory by the International Radio & Television Society.

Thompson holds a B.A. in political science from the University of Chicago and an M.A. and Ph.D. in radio, television and film from Northwestern University.