M. Cristina Marchetti, the William R. Kenan Professor of Physics and associate director of the Syracuse Biomaterials Institute, and George Saunders G’88, professor of English, are part of the Academy’s Class of 2014. They join more than 200 other newly elected scholars, scientists, writers, artists, activists and corporate and philanthropic leaders from around the world.

“We are extremely proud of professors Marchetti and Saunders, whose election to the academy speaks to the scholarly excellence of our faculty,” says George M. Langford, dean of the College of Arts and Sciences. “Cristina Marchetti is a world leader in theoretical physics—part scientist, part visionary. George Saunders is one of today’s leading short-story writers, known for his trademark wit and singular vision. Both of them are among our finest ambassadors.” 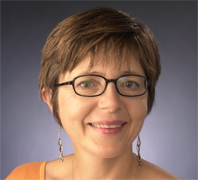 Marchetti is one of the leading lights of the physics department, where she also belongs to the Soft Matter Program. Her research seeks to understand the physical principles governing the organization and mechanics of soft and biological matter, from synthetic micro-swimmers (i.e. micron-scale swimming robots) to bacterial suspensions, cells and tissues.

This semester, Marchetti is a Simons Fellow at the University of California, Santa Barbara, where she has been studying theoretical modeling of active matter and has organized a four-month program at the Kavli Institute for Theoretical Physics.

“Professor Marchetti is a remarkable leader and an internationally renowned researcher,” says Alan Middleton, professor and chair of physics. “She uses theory and computation to study how swarms of ‘active matter,’ such as bacterial colonies, cells in tissue, and flocks of birds organize, flow and form vortices. Professor Marchetti is also a leading organizer of conferences and schools and plays an active role in the American Physical Society [APS].”

In addition to being a fellow of both the APS and American Association for the Advancement of Science, Marchetti has numerous honors to her name, including the Chancellor’s Citation for Academic Achievement at Syracuse University and a Rotschild-Mayent Sabbatical Fellowship at the Institut Curie in Paris (France). 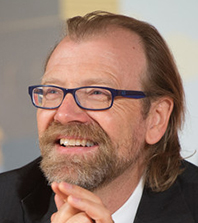 Saunders is the author of eight books, including “Congratulations, By the Way: Some Thoughts on Kindness” (Random House, 2014), drawn from a speech he gave last year at the college’s undergraduate convocation ceremony, and “Tenth of December” (Random House, 2013), a New York Times bestseller that has spawned a raft of awards, including the Folio Prize, the Story Prize, the PEN/Malamud Award for Excellence in the Short Story and the George Arents Award (SU’s highest alumni award).

Last year, Saunders was called by Time magazine one of the world’s most influential people and was a finalist for the National Book Award. Earlier this month, he participated in a panel discussion titled “Great Universities in the Next 25 Years,” in conjunction with the inauguration of Chancellor Kent Syverud.

“We hired George to teach writing at Syracuse University 18 years back, and he brings to class a similarly humble urge to serve,” says Mary Karr, the college’s Jesse Truesdell Peck Professor of Literature. “His work is a stiff tonic for the vapid agony of contemporary living—great art from the greatest guy.”

Saunders has also received four National Magazine awards, the O. Henry Award and Guggenheim and MacArthur fellowships. In addition to being a regular contributor to The New Yorker, Harper’s and McSweeney’s magazines, he is an accomplished journalist, whose long-form pieces have appeared in GQ and Esquire.

Marchetti and Saunders will be inducted into the academy at its Cambridge, Mass., headquarters on Oct. 11.

The academy is a leading center for independent policy research. Its members contribute to academy publications and studies of science and technology policy; energy and global security; social policy and American institutions; and the humanities, arts and education.