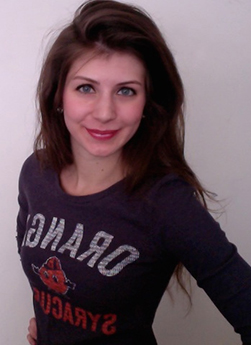 Kristin Weeks, a junior in Syracuse University’s College of Arts and Sciences, may be from the tiny Western New York village of Akron, but this young woman has big dreams and huge goals. Weeks, who is ambitiously pursuing a triple major in biology, sociology and political science, is a member of the Renée Crown Honors Program, a Coronat Scholar and a recipient of the Norma Slepecky Undergraduate Prize.

The award is given in honor of the late Norma Slepecky, who was a distinguished auditory neuroanatomist and a Syracuse University faculty member. A professor of bioengineering and neuroscience in the College of Engineering and Computer Science and a member of the Institute for Sensory Research, Slepecky was a passionate researcher and an advocate for undergraduate student research. With her enthusiastic approval, Slepecky’s family, friends and colleagues joined together to endow the Norma Slepecky Memorial Lectureship and Undergraduate Research Prize, just prior to her passing in 2001.  The deans of the represented colleges designated Women in Science and Engineering (WiSE) as stewards for this lectureship and prize. WiSE supports persistence and success in STEM academic disciplines (science, technology, engineering and mathematics) for women, from freshman to faculty.

In order to compete for the Slepecky Prize, students are required to submit documentary evidence of their research as undergraduates. Weeks, who is currently studying abroad at the University of New South Wales in Sydney, Australia, submitted the award winning paper, “Nutrient Limitation of Bean Plant Performance Under Co-Stress: Herbivory and Soil Halogenation.” 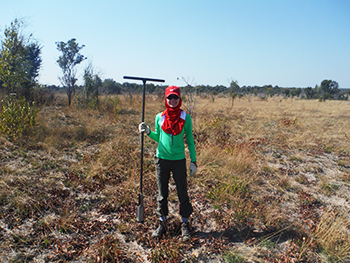 Referring to Weeks’ paper, Mark Ritchie, professor of biology and Weeks’ advisor, says, “The most important aspect of the work is her discovery that leaf temperature reflects the response of plants to nutrient stress.” He adds that most undergraduates have difficulty completing one research study, but he is amazed by Weeks’ persistence. “She has completed three research projects and has done so largely without close supervision or detailed direction. This speaks to her ability to process complex information and act on it. It also speaks to her emergence as a budding young scientist.”

Weeks, who shared the second-place prize with another student, plans to pursue graduate school after completing her undergraduate studies. She hopes to practice biological research after earning Ph.D. and M.D. degrees. Scott Erdman, associate professor and associate chair of biology, accepted the award on behalf of Weeks at the award ceremony on April 21.

The Norma Slepecky Undergraduate Research Award is designated to undergraduates in science and engineering, with strong encouragement for applications by young women researchers. The first award was given in 2004. Ten first prize awards and 11 second prize awards have been given since then.