A 20-year veteran of the University faculty, Ann Grodzins Gold has racked up dozens of awards and fellowships during her career. Recently, Gold, a professor in the Religion Department in the College of Arts and Sciences, who also holds a courtesy appointment in the Department of Anthropology in the Maxwell School of Citizenship and Public Affairs, added two more fellowships to that list of accolades. 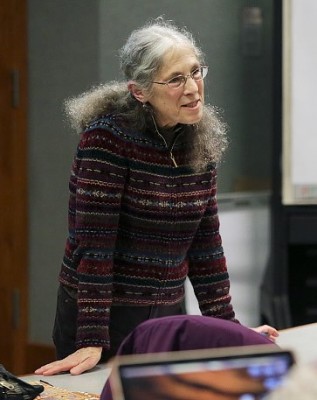 Gold, the Thomas J. Watson Professor of Religion, is one of 178 scholars, artists and scientists out of an applicant pool of nearly 3,000 who was awarded a John Simon Guggenheim Memorial Foundation Fellowship. According to the Guggenheim Foundation, 56 disciplines, 83 academic institutions, 29 states and 2 Canadian provinces are represented by this year’s fellows, who range in age from 29 to 77.

Gold was also one of 41 scholars out of more than 360 applicants appointed a 2014-2015 fellow by the National Humanities Center (NHC). The NHC fellowship enables the selected scholars to take leave from their normal academic duties and pursue their research at the center, which is located in the Research Triangle Park in North Carolina. While at the center, Gold will complete a book tentatively titled “Shiptown: North Indian Lives between Rural and Urban.”

“I am honored and humbled by this spring’s fellowship bounty,” says Gold. “ I will truly miss interacting with my Syracuse students and colleagues, but I am elated to have this precious opportunity to devote myself to writing ‘Shiptown.’”

Gold’s research and teaching are rooted in more than 30 years of ethnographic engagement with religion and culture in provincial North India. Located in a single region, her fieldwork and writings concern diverse topics, including pilgrimage, gender, expressive traditions, environmental history and most recently landscape and identity in a small market town.

“Ann is so incredibly deserving of these accolades,” says James Watts, chair of the college’s Department of Religion. “She is a prolific researcher and author who is widely recognized as a leader in her field (the anthropology of South Asian religions). She is also a generous and wise colleague in two different SU departments and a skilled administrator and University leader, as we recognized especially during her simultaneous stints some years ago as director of the South Asia Center in Maxwell’s Moynihan Institute and as Tolley Professor of the Humanities in the College of Arts and Sciences. We are lucky to have her here at Syracuse University and we wish her well as she writes her next book while in North Carolina.”

“It does not surprise me to hear of Ann’s recent accomplishments,” says John Burdick, professor and chair of anthropology. “Time and time again, Ann is recognized for her tremendous commitment to learning, research and education. She amazes her colleagues and her students every day, and I know I speak on behalf of all of us at Maxwell in congratulating Ann for yet another job well done.”

Prior to joining Syracuse University, Gold held various faculty positions at Cornell University and Colgate University. She has received fellowships from the American Institute of Indian Studies, the Fulbright Foundation, Fulbright-Hays, the National Endowment for the Humanities, the Social Science Research Council and the Spencer Foundation. Her publications include numerous articles as well as four books, with the fifth in progress. Gold earned a Ph.D. and master’s degree in anthropology from the University of Chicago.