The Lasting Legacy of a Teacher, Mentor and Friend 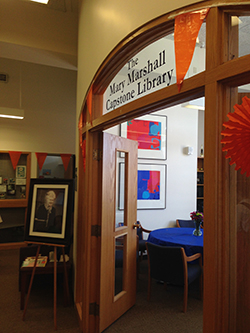 The Mary Marshall Capstone Library was dedicated recently as part of the honors program’s 50th anniversary.

Professor Mary Marshall would have been proud.

Former students of the English literature professor, who passed away in 2000, and the current generation of honors students gathered Monday in Bowne Hall to dedicate the honors program’s library in her name.

“She was the finest of mentors,” said Edward Menkin G’67, G’72, L’77, who spoke at the event. “She would be thrilled to see so many young women and men here today and deeply touched by this dedication.”

Marshall, founder of the original Honors Program and the program’s first director, created a lasting legacy in her work with five decades of students and in the program’s continuing cohort of students who have never met her but benefit from her vision and efforts.

The dedication of the Mary Marshall Capstone Library was part of the honors program’s 50th anniversary year celebrations that have taken place during the academic year. The program began in 1963 in the College of Liberal Arts with Marshall at the helm and a host of challenging, small classes.

Over the years it grew to include the entire University and eventually renamed the Renée Crown University Honors Program.

Among her many academic interests, Marshall, who joined the University in 1948, was a scholar of William Shakespeare, said Stephen Kuusisto, director of the honors program and professor of disability studies. The playwright was among the first to write for literate audiences, who because of their greater understanding could ask questions of the story being told—an attribute highly regarded by Marshall, Kuusisto said.

“Mary understood that a modern inquiring mind should be a contrarian mind,” Kuusisto said, and encouraged students to question perceptions and remain curious.

“She was a great teacher, and she was somehow always looking to improve not only the study and scholarship of students but of the University she served,” Kuusisto said. “Not only did she launch the honors program, but she played a primary role in helping to establish Bird Library.”

Her nearly five-decade-long career made her a legend at the University. “It is a privilege today for us to honor her memory by renaming our library in the honors program after her and pay homage to her great energy, her enthusiasm, her pioneering efforts and the fact that her spirit lives on in this very fine program,” he said. 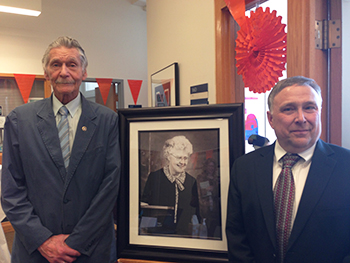 Sanford Sternlicht G’62, professor emeritus of English, recalled Marshall as a teacher, mentor and friend, who also lived near his family in the University neighborhood. He noted how she continued to work at the University after her retirement, teaching courses through University College.

“Her courses filled up with students,” Sternlicht said. “She had this entirely new career” in her later years.

Marshall graduated from Yale University with a Ph.D. in 1932 and was encouraged by the English department there to become a permanent faculty member, Menkin said. The university’s Board of Trustees, however, rejected her because they didn’t hire women, he said.

Undeterred, Marshall headed west to teaching jobs in Illinois and Montana, and later Maine, before coming to Syracuse University.

Menkin shared how he was in his last semester of graduate school and began talking to her about possible courses he would take.

“She said, ‘Don’t take courses, take people,” Menkin told the students. “I’m passing that wisdom on to you.”