Tickets are sold out for the third annual “Truth be Told” event featuring award-winning journalist Anderson Cooper on Thursday, April 24, at 7 p.m. in the Joyce Hergenhan Auditorium. However, there will be overflow viewing of the live event will be available in Food.com of Newhouse 3, in the Halmi Room of Newhouse 3 and in dining area of Schine Student Center.

The event is sponsored by Delta Zeta chapter of Alpha Phi Alpha Fraternity and the Syracuse University chapter of the National Association of Black Journalists. 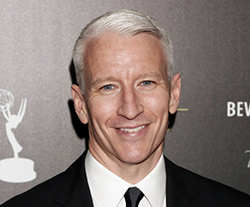 “Truth be Told” is an annual event hosted by Alpha Phi Alpha that aims to have influential speakers voice their opinions on various relevant topics. Cooper is currently a CNN anchor and host of “Anderson Cooper’s 360o.” He has won several awards, including the Peabody Award in 2005 for his coverage of Hurricane Katrina and an Emmy Award in 2010 for his special coverage on Haiti.

“Diversity goes beyond ethnicity, and is about bringing together ideas, culture and sparking conversation about these issues,” says Abdou Diakite, president of Alpha Phi Alpha Fraternity, Inc. “While providing service and advocacy for our communities, Mr. Cooper embodies this core value of our organization.”

“NABJ is happy to be collaborating with Alpha Phi Alpha for this milestone event,” says Kelvin Sherman, president of the NABJ chapter at Syracuse University. “Mr. Cooper crosses cultural lines that speak to just about everyone in the Syracuse community. We are two great organizations on campus and are happy to serve the Syracuse community.”

Community members are invited to join the conversation by submitting questions for Cooper via Twitter using #AndersonAtSU. Follow the event for all updates @Cuse_Alphas & @Nabj_SU.

For more information on the third annual “Truth Be Told: Anderson Cooper,” visit http://students.syr.edu/apa/jewels.html or http://www.nabjsu.wordpress.com.