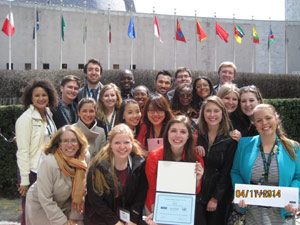 This distinction is the highest level of recognition for preparation, quality of position papers and other overall delegation awards based on work during the conference. The MNUN conference attracted over 2,500 student delegates from the United States and foreign universities to discuss current global issues.

Representing Tunisia, Maxwell delegates served on a variety of committees and tackled important topics from disarmament and security to peacekeeping to humanitarian crises and development. Head Delegate Kyra Murphy was selected by NMUN conference staff to serve as chair of the Organization for the Prohibition of Chemical Weapons Committee, and Assistant Head Delegate Meghan Schneider served as rapporteur for the General Assembly Fourth Committee.

The Model UN team members will be presenting a slide show and panel discussion about their experiences simulating global diplomacy on Tuesday, April 29, from 3:30-4:50 p.m. in 204 Maxwell Hall. The event is open to the public.