New York City’s Lower East Side, as seen through the eyes of early Jewish American writers, is the subject of a special presentation by a Syracuse University professor at the Library of Congress. 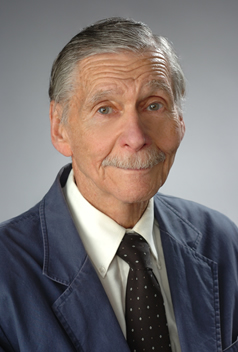 Sanford Sternlicht G’62, professor emeritus of English in The College of Arts and Sciences, will address the topic on Monday, May 19, from noon to 1 p.m. in the African & Middle Eastern Reading Room (room 220) of the Thomas Jefferson Building (10 First St., Washington, D.C.). The lecture is free and open to the public and draws on his critically acclaimed book “The Tenement Saga” (The University of Wisconsin Press, 2002).

“The opportunity to examine the great wave of Jewish immigration from Eastern Europe to the United States during the turn of the century—especially in such an august surrounding—is a tremendous honor,” says Sternlicht, an expert on U.S. immigration literature; 20th-century American, British and Irish literature; and theater history and criticism. “I will discuss not only the history of the Lower East Side, but also the manner in which it influenced and was influenced by early Jewish American writers. I’ll also weave in some of my own memories of growing up there, as the son of Jewish immigrants.”

Between 1882 and 1924, nearly 2 million European Jews settled in or passed through the Lower East Side. Many of these immigrants spoke Yiddish, a language that had long been suppressed by the Russian imperial government and denigrated by affluent German Jews.

“When these immigrants came to the United States and found their voice, so to speak, there was an explosion of Yiddish arts and culture,” says Sternlicht, who also has served as professor and interim director of the college’s Judaic Studies Program. “Having a shared heritage—a common language, faith and background—was reassuring to them, as they adjusted to living in a strange, new land.”

Nowhere was this renaissance more apparent than in the literary arts. Along with Yiddish theater, the Lower East Side became a haven for newspaper publishing—led by the founding of the first Yiddish daily newspaper, the Forward, in 1902—and fiction, as evidenced by the scores of novellas and short stories that were turned out almost daily.

For all its vibrancy, the Lower East Side could also be a difficult place to live. In addition to being New York City’s oldest neighborhood, the Lower East Side was the world’s most crowded. (It wasn’t uncommon for 15-20 people to share three rooms in a tenement building, while additional people slept in a sub-cellar.) Disease, crime and unemployment were as rampant as privacy and clean water were scarce.

Against this milieu emerged a circle of serious writers, led by Sholem Aleichem, I.L. Peretz, and Mendele Mocher Sforim, who carved out a distinct brand of American Yiddish literature. Concurrently, a number of immigrant authors, including Henry Roth and Michael Gold, began publishing in English, thus bringing the urban Jewish experience to the forefront.

“These authors created cultural artifacts that linked the immigrant community to the outside world,” Sternlicht says. “By placing their work in context of the Jewish immigrants that bore them—a community seeking to assimilate, prosper and maintain some of its Old World culture and religion—I hope to bring about greater understanding of and compassion for the human condition.”

Sternlicht joined the Syracuse University faculty in 1981, after teaching at SUNY College at Oswego for 30 years. He has written or edited some two dozen books on literary and dramatic criticism, as well as published several books of original poetry.

In 2009, the New York Council for the Humanities appointed Sternlicht a “Speaker in the Humanities”—a position that has allowed him to travel throughout the state and lecture on some of his books, including “The Tenement Saga.” A former Navy Reserve commander, he also has served as a Fulbright senior specialist and visiting professor of English at the University of Pécs in Hungary.

“’The Tenement Saga’ is perhaps my most popular lecture,” he says. “I look at how the Lower East Side helped shape women’s rights, Yiddish theater, secular values, generational struggles, street crime, labor unions and Yiddish newspapers and periodicals. It’s a story that has strong universal appeal.”

Sternlicht will be introduced by Peggy Pearlstein, former head of the Library of Congress’ Hebraic Section.