A Catalyst for Change

Leave it to Karin Ruhlandt, newly appointed interim dean-designate of The College of Arts and Sciences, to put a global spin on things. 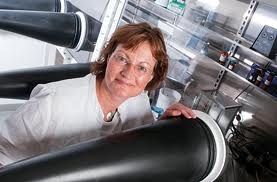 In 1999, when the Department of Chemistry was retooling its Research Experience for Undergraduates (REU) program, the German-born chemist not only helped secure federal funding for it, but also eventually expanded it into the Austrian city of Graz. Today, REU—and by extension, the chemistry department—is one of the college’s more cosmopolitan programs, driving collaborative research on both sides of the Atlantic.

This past August, Ruhlandt took her Eurocentricity to new levels with a major teaching and research fellowship in Graz. For six months, she served as a Fulbright-NAWI Graz Visiting Professor at two of the city’s largest research institutions: the Graz University of Technology (TU Graz) and the University of Graz. (“NAWI” refers to a unique teaching and research partnership between the two institutions.) Most of her time was spent at TU Graz’s Institute of Inorganic Chemistry, where she helped develop materials for rechargeable lithium-ion batteries. She also taught and advised students.

“It was like going home,” says Ruhlandt, who earned multiple degrees from the Philipp University of Marburg in Germany. “Graz is an amazing place because it combines a fascinating history, beautiful and innovative architecture and design, and a lovely countryside with a deep commitment to clean technology—not only in the city, where it significantly improves the quality of life, but also in the research done at local universities.”

At the end of her fellowship in January, Ruhlandt drove to northeastern Italy, where she and Cody Webb, a Le Moyne College student who also takes courses at Syracuse University, did a five-day stint at the Elettra Sincrotrone Trieste research center. They worked around the clock—sometimes sleeping in shifts–on a project involving metal-organic frameworks (MOFs), which are porous compounds that aid in the selective diffusion of guest molecules.

“MOFs have enormous technological potential, particularly in the storage, purification and separation of hydrogen and carbon dioxide,” says Ruhlandt, who has served as Distinguished Professor and chair of chemistry since 2009. “They’ve also shown to be good catalysts,” she says, referring to the kinds of reactions that are commonly used in “green chemistry” experiments and generate small amounts of waste.

Recent findings suggest that MOFs may someday play a role in the detoxification of chemical warfare agents. “The development of these new systems is like searching for a needle in a haystack,” says Ruhlandt, who also serves on the faculty of the Syracuse Biomaterials Institute. “There are many parameters that contribute toward the architecture [of MOFs] and, thus, their function.” 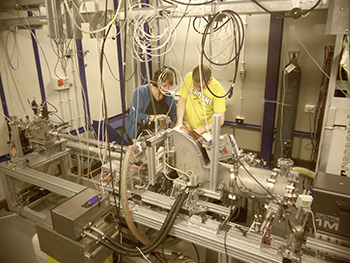 Ruhlandt is particularly interested in MOF formation and hopes to eventually design a toolbox—containing a metal and a linker, known as a ligand—that enables one to create a MOF with desired properties, without having to resort to thousands of unsuccessful trials.

“Working with Dr. Ruhlandt has been life-changing,” says Webb, who studies chemistry full time at Le Moyne and chemical engineering part time at Syracuse University. “Dr. Ruhlandt has taught me a lot,” he says. “She makes it a point to discuss complex aspects of our projects with me and then relate them to basic principles, which, in turn, deepen my understanding of chemistry.”

Since returning to campus in February, Ruhlandt has busied herself with research projects, ranging from cutting-edge work with semiconductors, superconductor sensors and hydrogen storage materials, to the development of materials that could revolutionize the joint replacement and bone reconstruction industries. “Finding something stronger than ceramic, lighter than steel and cheaper than titanium would be the holy grail of reconstruction therapy,” says Ruhlandt, a recent recipient of the Chancellor’s Citation for Excellence. “It also needs to be bioactive, so bone cells can adhere to it.”

When she’s not in the classroom or laboratory, Ruhlandt may be found cultivating research opportunities for women, minorities and undergraduates in the science, technology, engineering and mathematics (STEM) fields. She is particularly proud of her work with REU, which, through generous support from the National Science Foundation and Syracuse University, has provided hundreds of undergraduates with hands-on experience in basic research, making it one of the largest REU programs in the country.

Ruhlandt has also been instrumental in the success of the Women in Engineering and Science (WiSE) program; the ADVANCE Program, targeting women and underrepresented minorities in the sciences and engineering; and the Integrative Graduate Education and Research Training (IGERT) Program, which encourages Ph.D.-level scientists and engineers to engage in collaborative research. Many of her doctoral candidates have gone on to highly successful careers in industry and academia.

Meanwhile, Ruhlandt is excited about her new role in the college, which goes into effect in July. She is quick to acknowledge her many colleagues—notably Eric F. Spina, Syracuse University vice chancellor and provost, and George M. Langford, dean of The College of Arts and Sciences—who supported her nomination.

“The liberal arts mission runs deep in my heart, and I believe that a great college of arts and sciences, with a vibrant teaching and research agenda, should be at the center of Syracuse University,” she says. “I look forward to building on Dean Langford’s foundation of excellence, while continuing to forge national and global research partnerships and advance the goals of equity and opportunity across the sciences and humanities.”