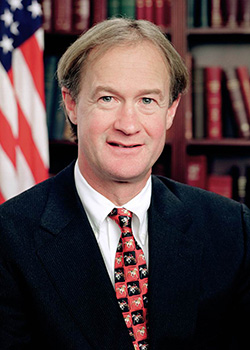 Rhode Island Gov. Lincoln Chafee will deliver the Tanner Lecture on Ethics, Citizenship and Public Responsibility at the Maxwell School on Thursday, April 24, speaking on “Civility and Citizenship: Reinventing the Great Society.” The lecture will begin at 6 p.m. in Maxwell Auditorium; a reception will follow.

Prior to becoming governor in 2011, Chafee served in the U.S. Senate, from 1999 to 2007; as mayor of Warwick for four terms; and as a member of the Warwick City Council for four years. Following his tenure in the Senate, Chafee spent two years as a distinguished visiting fellow at Brown University’s Watson Institute for International Studies, where he wrote “Against the Tide: How a Compliant Congress Empowered a Reckless President.” Chafee graduated from Brown University in 1975 with a degree in classics.

Politically, Governor Chafee has been at the center of the issue of polarization. A centrist Republican and the descendent of a long line of prominent Republicans, Chafee left the Republican Party in 2007 and was elected governor as an independent. In May 2013, he announced that he was becoming a Democrat, after concluding that his commitment to the people of Rhode Island was most aligned with that of President Obama and Democratic governors across the country. In September, he announced that he would not seek re-election.

The Tanner Lecture Series, which began in 2012, is sponsored by the Maxwell School’s Campbell Public Affairs Institute. The series provides a public forum for exploring questions about ethics and public responsibility in provocative and challenging ways. Speakers are leaders in their fields who have wrestled with these questions and demonstrated—through their life and work—that generative efforts can enrich both our private and public lives.