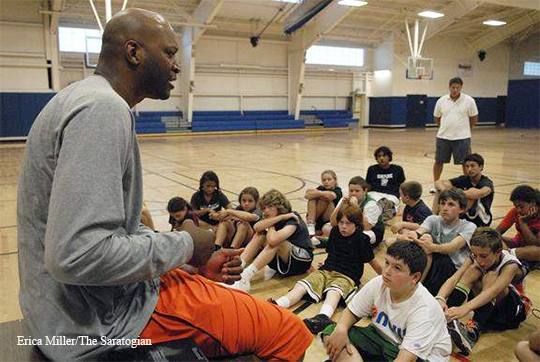 John Wallace speaks to youngsters at the Saratoga Rec Center during a basketball camp. He often reaches out to inspire young people.

John Wallace had always had a general knowledge about the life of Harriet Tubman. But it was a course he took on his return to Syracuse University to finish his degree that made him see something much deeper about the courageous woman who led several hundred slaves to freedom.

The field school course through the Department of Anthropology involves students studying and excavating areas around Tubman’s Auburn, N.Y., home.

“The course was so hands on and in depth,” Wallace says. “She was a very strong, powerful lady. It was an amazing experience to dig up artifacts at the home where she lived and see the elements of the Underground Railroad. I really enjoyed the course.”

Wallace, who left Syracuse in 1996 during his senior year and was a first-round draft pick by the New York Knicks, returned to the University beginning in 2005 to complete a sociology degree in The College of Arts and Sciences. The Tubman course was a highlight of the time he spent working to complete his coursework toward his diploma, obtaining a degree in 2012.

“That’s your objective when you go to school is to get your degree and get a job,” says Wallace, Syracuse’s single-season leader in men’s basketball for points scored (845 in 1995-96). “Throughout the course of college, certain things may or may not happen that lead to you getting that degree.”

For him, at that time, he chose to begin his career in the NBA, which spanned eight seasons and included his time as a member of the Detroit Pistons and Miami Heat. But he always knew he would return to Syracuse. It was a priority. 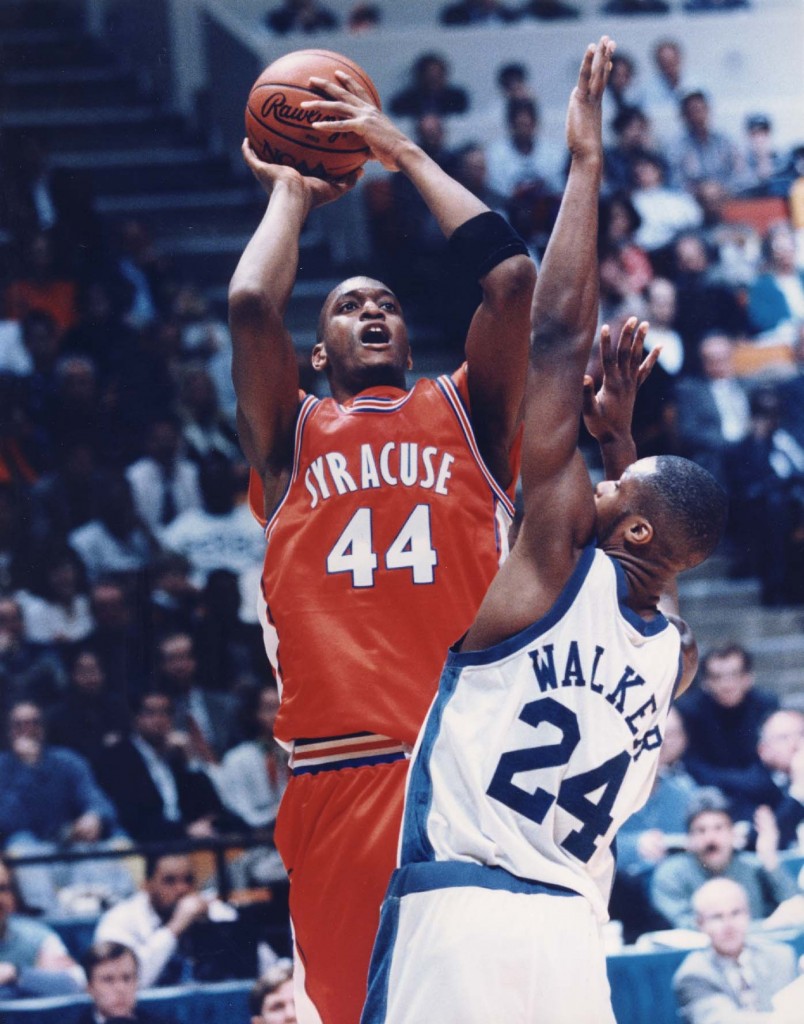 “I owed it to myself; I owed it to my mom and my kids and the kids that I speak to in my youth mentoring program. I’m speaking to them as a college graduate and that was important to me,” says Wallace, who earned All-American honors and led the Orangemen to the 1996 NCAA championship game.

Student-athletes at Syracuse University, as with any other student, may decide to leave their academic career early for a number of reasons, but there’s always one good reason to return. They can have the satisfaction of completing their degrees, made easier through the support of the Department of Athletics.

Syracuse University Athletics, in conjunction with Academic Affairs, has a program in place for former student-athletes to help them finish their coursework and earn their diploma.

Student-athletes may have family, professional or other obligations that take them away from finishing their education, but that doesn’t have to be the end of their academic career at Syracuse University, says Tommy Powell, assistant provost of Student-Athlete Academic Services.

“As athletic directors and administrators, we all get into this business to help student-athletes graduate,” Powell says. “If they worked to remain in good standing while they were here, these student-athletes deserve to be supported and given an opportunity to come back and finish their degree.”

Even before students arrive at Syracuse, families are told that student-athletes who may leave the University can return later if they keep in good academic standing.

“We let them know on the front end; they have to take care of their business while they are here,” Powell says. “They have to be a good student, a good student-athlete, and do the right things to leave in good shape, so they would be in a position to come back and finish.”

Student-athletes, such as basketball players Wallace and Lawrence Moten and football player Doug Hogue, who all went on to have successful professional careers, returned to the University to continue their studies. Moten, the leading scorer in both Syracuse and Big East Conference history, was drafted into the NBA and later completed his degree at Syracuse. Hogue, who was selected by the Detroit Lions in the 2011 draft, is currently back finishing up his coursework.

Wallace, who, along with former professional basketball player Modie Cox, runs a youth mentoring and empowerment program called Winning Because I Tried, also took online courses to finish up his degree in several parts, and always felt he had the support of the athletics department, including the strong backing of his former coach.

“They were influential in helping me get everything set up,” says Wallace, who is also involved in organizing amateur sports programs. “Coach Boeheim, literally every time I saw him the first thing he’d say was, ‘Are you going to finish up? You’re the smartest kid I ever had at this school. You definitely have to finish up—not for me, not for the school, but for yourself.’”

To be readmitted to the University through the Degree Completion Program in SU Athletics, former student-athletes can contact a member of Student-Athlete Academic Services through the Stevenson Educational Center for Student Athlete Development.

Staff members then work with the individual to see what they need to complete their degree, and then develop a graduation plan.

“I speak to our athletic director to let them know this person is coming back and we need to get them support,” Powell says. “Once that’s approved from that level, we work with them to get them readmitted and meet with their advisor on campus to get their classes scheduled and then have their plan in place.”

The former student-athletes have come back to campus to take courses and also enrolled in the University’s online courses that meet their degree requirements.

“In addition to providing them support, we’re also giving them the same level of tutorial and time management support, if needed—all the things that they would have had while they were first enrolled,” Powell says.

Powell says the Stevenson Educational Center works extensively with first-year student-athletes, and all student-athletes who need support, and provides assistance that includes objective-based study periods that help students manage their schedule of work.

“Instructional assistants will sit down with the student at beginning of the semester, gather the course syllabi for their classes and help them make a calendar of every assignment due throughout the semester,” Powell says. “When they walk into the center for a scheduled eight or nine hours, that time is about meeting the objectives for their various assignments.”

For those who come back, they can go into that same program if that’s what they need, Powell says.

“For us, we’re like the nerds of the athletic department,” Powell says. “That’s our championship—when these men and women come back to get their degree, graduate and finish what they really started when they first came.”