Student start-ups won a combined $153,000 in seed funding at the third annual Emerging Talk conference on April 11 and 12. Emerging Talk was a weekend full of inspiring Power Chats by local and national entrepreneurs, a keynote by “Shark Tank”’s Kevin Harrington, four seed funding competitions and Demo Alley, where students showcased their ventures. 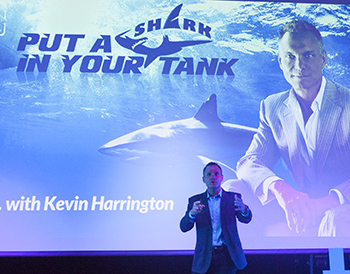 Over 250 students, entrepreneurs, investors and community members came to Revolutions in Destiny USA to be inspired, network with like-minded individuals and tap into the thriving entrepreneurial ecosystem in Central New York. Emerging Talk was organized by the RvD IDEA office at Syracuse University, an office out of Academic Affairs devoted to exposing all University students to entrepreneurship.

“Emerging Talk was intended to provide a space for the entrepreneurs in Central New York to meet, learn about each other and network,” says Tony Kershaw, assistant director of the RvD IDEA. “I left Revolutions at midnight and there were still a lot of people there networking and making connections, which was exactly our goal.”

On Saturday, over 200 students, entrepreneurs, investors and community members came to the Whitman School of Management to watch students pitch in several competitions, display their businesses and ideas at Demo Alley and win seed funding to take their ventures to the next level.

The Raymond von Dran (RvD) IDEA Awards competition has provided seed funding to help student entrepreneurs launch their ventures since 2009. The RvD IDEA Awards are funded, in part, by the RvD Fund in the iSchool. The fund was named after the late iSchool dean, Raymond von Dran.

“Ray [von Dran] was an academic entrepreneur and, like the student entrepreneurs, embodied the ‘can-do spirit,’” says Gisela von Dran, professor emeritus at the iSchool and benefactor of the RvD IDEA Awards. “The students’ drive to bring about change through new ideas, innovations, products and services–and their determination and hard work–makes them stand out as role models. I am proud to support their endeavors and to keep their talent here in Central New York.”

The Panasci Business Plan Competition is a Syracuse University campus-wide student business plan competition, hosted by the Falcone Center for Entrepreneurship, and made possible by long-time Whitman supporter the late Henry A. Panasci, founder of Fay’s Drugs.

The College of Engineering and Computer Science’s Invention & Creativity Competition offers students the opportunity to pursue entrepreneurial endeavors and encourages students to leverage their education in science and technology to bring their ideas to fruition. This competition was open to any Syracuse University team consisting of at least one College of Engineering and Computer Science student.

The student teams were composed of an interdisciplinary mix of talent and a diverse range of majors, including civil, mechanical, electrical and bioengineering, political science, finance, fashion design, information management and public relations. Funding is awarded to student companies to cover start-up expenses, including salaries of company owners and employees, space rental, marketing, legal, website and proof-of-concept development.

“The funding we received is critical to our current stage of product development and will allow us to bring the company to the next level of market deployment,” says James Shomar, CEO of Solstice Power. “The funding from the RvD IDEA will allow us to purchase the materials, equipment, product testing time, patent filing, consultants and marketing expenses crucial to our success. We can now cross the next milestone necessary to build a renewable energy system and reduce the enormous financial burden in energy costs plagued upon many of the most vital components of our society.”

“The generous RvD Idea Award will help us pull the curtain up on our show,” says Gabrielle Kroner, founder of Yellow Brick Actors. “With the funding, Yellow Brick Actors has a solid financial footing moving forward in our outreach programs come May. Being supported through this award and the great people who make the event happen, Yellow Brick Actors will continue to reach over 500 patients and help families within the Upstate New York area heal through the power of drama and play.”

Twenty-seven student teams took part in Demo Alley, where they had the opportunity to talk about their venture with investors, faculty, students and community members. OPENLift, LLC won $500 for Best Display.

“The RvD IDEA Award will allow our company to start building a prototype of our biosensor,” say David Pierre and Corey Jackson, co-founders of ElectroChem Tracking. “We will be able to purchase materials and software to test the biosensor as we move closer to having a tangible product to show potential investors. The feedback from IDEA staff and mentors from across the University were extremely helpful in pushing us to develop our idea further.”

The winning companies are:

$2,500 Goldberg Prize for Technology and Innovation

Emerging Talk’s Friday night events were sponsored by 9A, the Gear Factory, Revolutions, SubCat Studios, WonderWorks, Destiny USA and Quartier. The RvD IDEA Awards were sponsored by IDEA, the RvD Fund at the iSchool and the Syracuse Center of Excellence. BiTHouse is providing $5,000 in business development services and consultation to the top winner in the biotech/health care, IT and social enterprise/nonprofit categories of the RvD IDEA Awards.

The Raymond von Dran IDEA provides contacts, resources and funding support for student entrepreneurs at Syracuse University. A list of all RvD IDEA and Invention and Creativity Competition applicants can be found at http://idea.syr.edu/ventures. To learn more about IDEA, email idea@syr.edu.