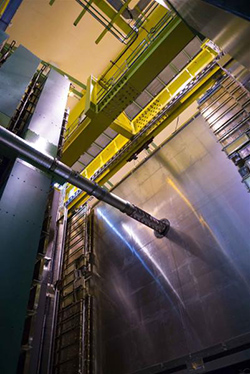 A view of the LHCb experiment at an underground point on the Large Hadron Collider (LHC). The prominent tube is the LHC beam pipe, where protons circulate at close to the speed of light. (Photo by Anna Pantelia/CERN)

Physicists in The College of Arts and Sciences have helped confirm the existence of exotic hadrons—a type of matter that cannot be classified within the traditional quark model.

Their finding is the subject of a forthcoming article, prepared by the Large Hadron Collider beauty (LHCb) Collaboration at CERN in Geneva, Switzerland. (LHCb is a multinational experiment, designed to identify new forces and particles in the universe.) Tomasz Skwarnicki, professor of physics, is one of the paper’s lead authors.

“We’ve confirmed the unambiguous observation of a very exotic state—something that looks like a particle composed of two quarks and two anti-quarks,” says Skwarnicki, a specialist in experimental high-energy physics. “The discovery certainly doesn’t fit the traditional quark model. It may give us a new way of looking at strong-interaction physics.”

Quarks are hard, point-like objects found within the nucleus of an atom. When quarks combine in threes, they form compound particles known as baryons. Protons are probably the best-known baryons.

Sometimes, quarks interact with corresponding anti-particles (i.e., anti-quarks), which have the same mass but opposite charges. When this happens, they form mesons. These compounds often turn up in the decay of heavy man-made particles, such as those in particle accelerators, nuclear reactors, and cosmic rays.

Mesons, baryons and other kinds of particles that take part in strong interactions are called hadrons.

This classification remained virtually unchallenged until 2007, when an international team of 400 physicists and engineers known as the Belle Collaboration discovered an exotic particle called Z(4430), which appeared to have two quarks and two anti-quarks. 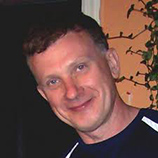 “Some experts argued that Belle’s initial analysis was naïve and prone to arrive at an unjustified conclusion,” says Skwarnicki, adding that other exotic states have since been observed. “As a result, many physicists concluded that there was no good evidence to prove this particle was real.”

A few years later, another multinational team, known as BaBar, used a more sophisticated analysis technique, only to end up provoking more controversy over the existence of Z(4430). “BaBar didn’t prove that Belle’s measurements and data interpretations were wrong,” Skwarnicki says. “They just felt that, based on their data, there was no need to postulate existence of this particle.”

Belle responded with an even more rigorous analysis of the same data set. This time, they found statistically significant evidence for Z(4430), despite the complexity of the analysis and a large number of assumptions made about the particle’s production environment.

LHCb, which, for much of the past year, has closely studied its own particle data, used Belle’s and BaBar’s analysis techniques. In the process, Skwarnicki and his team confirmed that Z(4430) was for real—and an exotic hadron, to boot.

“This experiment is the clincher, showing that particles made up of two quarks and two anti-quarks actually exist,” Skwarnicki says. “There used to be less-clear evidence for the existence of such a particle, with one experiment being questioned by another. Now we know this is an observed structure, instead of some reflection or special feature of the data.”

Sheldon Stone, SU professor of physics, leads a team of SU researchers at CERN (also known as the European Organization for Nuclear Research) in Geneva.

“We analyzed tens of thousands of meson decays, selected from trillions of collisions in the Large Hadron Collider [the world’s largest, most powerful particle accelerator] at CERN,” he says. “Because the data sample was so large, it forced us to use statistically powerful analysis that could, in turn, measure properties in an unambiguous manner. It’s great to finally prove the existence of something that we had long thought was out there.”

Adds Skwarnicki: “Each experiment—Belle, BaBar and LHCb—analyzed its own data. Although it pertained to the same process, the data was collected at different times, with different colliders and with different apparatuses for capturing outgoing particles. Our findings are unique to our experiment.”